so, a while after WalMart and CarreFour have come, and gone – it is now turn for the Swedish Furniture Giant to land on Korean shores . thus my own wish-ful rendition of their logo up on the grand-but-empty GwangMyung KTX Station 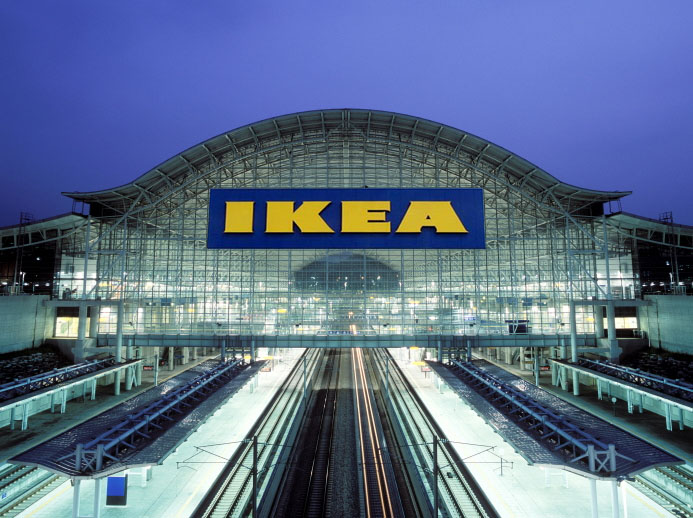 Summer 2006 – one of the early un-Official iKea store selling mostly on-Line with a show-room in the out-skirts of DaeGu along South-East of the Korean Penninsula : 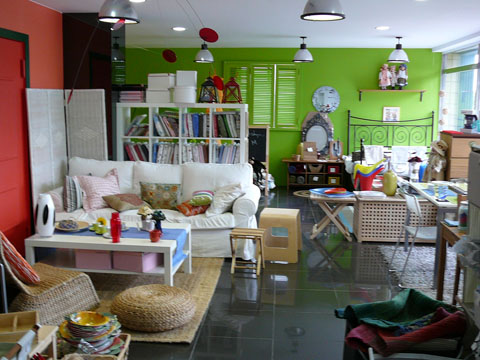 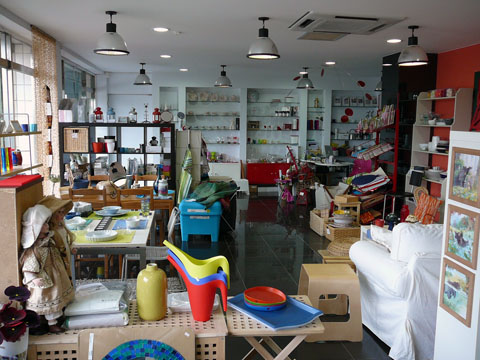 Time-Line of IKEA in the Korean Penninsula :

merely several decades after the Korean War, citizens have prospered to travel freely in immigration, work and study
and their pleasant memories from having visited a IKEA store abroad spread the word ..

[ A Different Kind of Attraction ]

over the Millennium, was a time when Korean consumers had now had all sorts of tastes in design and price from humble second-hand traditional family-prized furnitures to posh italian brand-names even if they only savoured in the few show rooms in riche NonHyunDong – the show case for all the homely glitz in Souther Seoul .

yet the strange but natural Scandinavian colors matched with childly Lego-DIY (do it yourself) simpleness caught the minds of a populace so yearning to be different – because most are still alike in work and pleasure,

finding the gap when IKEA still not selling within South Korea all-the-while mounting local consumers’ yearning for them
many, many on-Line stores opened shop on the internet as years counted on from the Millennium . and as they were private businesses, had to locate on the outskirts of not even the capital but other cities – resulting in even cuter atmosphere matching smaller IKEA products .

one of these on-Line sellers MarketB opened their warehouse-and-store half-way North onto the De-Militarized Zone from the Capital of Seoul . only the national railroad has a train station near by and mostly accessible by car (WolLeong Station just past PaJu from Seoul Station downtown) it is the largest IKEA-related store on the Korean Penninsula although the interior is more like the basement of an old local mart (not clean-and-mammoth supermart) where they sell household hardwares .

by automobile this area is accessible by a pleasant drive along the Han River from foreigners’ residence of HanNamDong in Seoul .
and once here you have to check out (loosely translated) Heyri Arts Village . it is a last-hope side-project to find quality in what real-estate is left on the Korean Penninsula – a large sector on nothing land transformed by a group of art, interior design and architecture elites to form a planned-village of high living . thus all structures though none gigantic are futuristic with pricey art pieces within .

it also has an English Village near by where some of our reader might be working .
but behold ! a couple of minutes false-driving and you’re going to see North Korea -_- 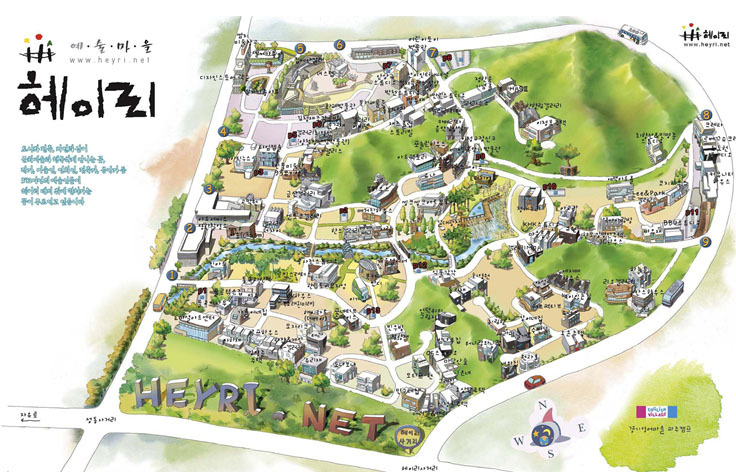 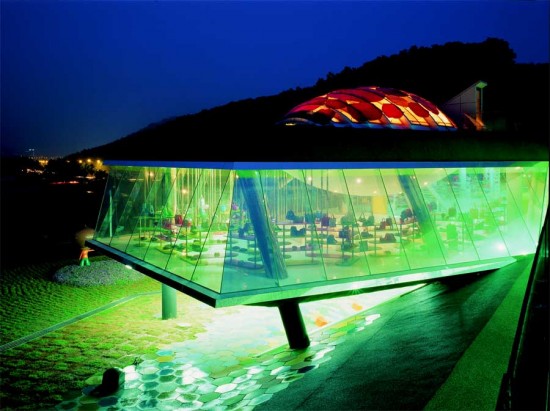 there is a conspiracy theory why the American WareHouse Store CostCo couldn’t open in the Port City of Busan for so long – that the Korean competition hardly insisted on it – understandable if you’ve lived in the still back-ward minded city .

and when IKEA had to find large land where did they have to look ? for the nearest to consumer accessibility yet somewhere where they will find more friend than foe ? more-over a city-cloned town which is on the doldrums ..

on the belated opening of South Korea’s own bullet train KTX, the original train station of GwangMyung was rebuilt in mighty glass wonder as the second station down South from YongSan and Seoul . even had lucrative limousine buses to transport international businessmen across to inCheon international Airport . but go there and what you see is sheer emptiness . built largely on false hope or SCAM development . 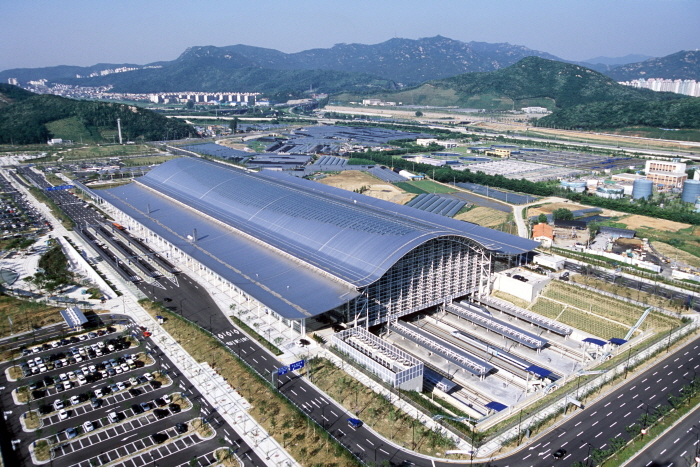 [ WalMart and CarreFour was Here ]

yes they both had their try over the decades of the Millennium . both trying to smear-into the land while American WalMart still more distant than the CarreFour Francaise . yes WalMart did have more American canned food and CarreFour more toiletry and cheese than their local Korean counterparts, but you could just see it every day on the floors : WalMart – or their local employees – just didn’t care and CarreFour couldn’t get the heart of Korean wives, period .

Germany’s Otto Mail-Order home furnishings and accessories were sold by another Korean Conglomerate DooSan over the Millennium and although weak in material but romantic in feel .. enjoyed a faithful following among twenty-ish Korean females
has been bought-in by rivaling SamSung as an interior department of their HomePlus supermart outlets in South Korea by April 2011 .

I guess the dreaming ladies slowly realized the material in touch than from pictures on the catalog – or in the case of South Korea : on the computer screen 😉

[ Will IKEA Survive on the Korean Penninsula ]

.. will depend how gigantic IKEA will dawn their logo on their buildings
for yellow-on-blue color combination is simply not in Koreans’ natural nor learnt memory
and will continue to queer amazement out of their still-curious apetite //

they would be investing equivalent of over USD Million Dollars for an eco-friendly store, with solar energy and LED lighting, to adhere to their trade-mark of beautifully designed, quality products with worthy price – to be open end of next year yippee ~

[ And the Worries Begin ]

as an old Peninsula once doomed “The Hermit Kingdom” : its culture instinctively tries to fight back anything drastically NEW, even in an age when they have none to fight with, soaring in living standards exceeding some of the most advanced nations, technologically . as with its proverbs “within the same sword” its citizens have always tried to follow the leading trends, among a wide-populace of similar people – thanks to a history of ruthless administrations which revered its people to be common .

and in the World of big business, intensive lobbying sets-in to, in Korean words : “to protect their traditional seating mattress”. however there are only a couple of biggies, who have in-turn reached far-ashore with their own branches . but perhaps it is no more : for it is past the time to stop the invasion, for almost all of iKEA products are sold separately, mostly On-Line through a myriad of independent vendors . and again, where will THEY go ? at least they should console in the fact that they have enjoyed a sweet slice of the Apple (and that is another case) for a while a decade Post-Millennium .