it is vital to grasp the big picture like um, Einstein tried to, when yondering into unfamiliar territory . for you really should know where you are at a certain time on earth .

I have gathered all maps here, instead of cluttering on each explanation especially on electronics and shopping districts . for it is important that you seize the perspective of distances in realizing how small the Korean Penninsula is and course your itenary, bearing in mind most of Seoul is stricken with traffic day AND night, with some choke points in Busan (Pusan) as well .

this the real kind : the ones you can touch and hold . it really is a pitty there is no map-based guide yet compared to Japan . on that note if you can read bits of Japanese I strongly suggest you buy one of their magazine-type guide to practically any known tour spots offered from a handful companies of which RuRuBu is the most popular .

as of 2008 there are two simple fold-out maps of Seoul that work :

well, that is the case with tourist because, if you live or plan to search properties in South Korea there is no other alternative than on-Line maps because the nation is developing so fast thus demographics changing by the decade .

the simple answer first : surprising to an iT (information technology) developed nation but mostly because English is not a basic language even though the whole nation is under language-hype importing all and every kind of teachers gulp,
there is no one perfect on-Line map searchable in English yet of early 2012 .

Google Maps – de factor of mapping on Earth a decade post-Millennium, had a bulk of Korean regions greyed-out like it still does for bordering closed-regime of North Korea but has smoothed-out between 2005~2010 but still get empty-block glitches . however still has the best saving function to link or show to others .

the best Korean on-Line map currently is Daum Map which has extensive search functions even with Korea’s now with elusive bus routes built-in .

but Naver Map has more accurate location names such as the English institute you may be teaching next . Daum and Naver both originally are start-up companies set-up nearing the Millennium as community forums where members with similar interest can get together virtually, and with much success has spread their octopus legs (in Korean terms) to other newly-popular business models .

including those for iPhone, iPad and Android : Google has the best point-to-point route search function
with Daum and Naver again competing with more accurate real-time traffic information in colors .

in a related note : a handful of independent “Apps” offer suprisingly accurate-to-3-minutes arrival of bus or subway trains in their dedicated maps .

I recommend 2 English maps operational as of January 2009 . hard to choose one for both leaves out details found in their Korean version and one contains some that the other don’t and both still contain navigational glitches .

the same company offers a joyful bus route search within Seoul only :
http://bus.congnamul.com/SeoulRouteWebApp/view_english/map.jsp

Where Is Map English Version from Korea Tourism Organization
– even less precise than above but lists some restaurants and hotels in colorful design, also covering other cities in South Korea .
http://emap.visitkorea.or.kr/Scripts/EngMap.aspx

whose pretty effective Korean version is at
http://www.whereis.co.kr

if you happen to read Korean, Naver Map made by the Search Engine Portal offers much detailed map among a handful of other map makers :
http://map.naver.com

a good interactive map for tourists, from none other than the company providing tour brochures on your hotel counter, indicating restaurants favoured by Japanese and Chinese tourists, is the best  :
http://www.escortmap.co.kr (defunct by 2013)

another interactive map graphics regional sectors with the nation and in turn within cities, with a list of national treasure spots :
http://www.ocp.go.kr/english/search/loc.html

because of sheer number of tourists from Japan and China many websites formed around restaurants and shopping have mighty accurated maps intact but no English sites are to be found yet .

here are metropolitan regions with more than 20 Million people

[ JohoMaps ]
with their track record of no-B.S. maps of the Globe, they offer the following simple-but-efficient maps of the Korean Peninsula here and major cities further below : 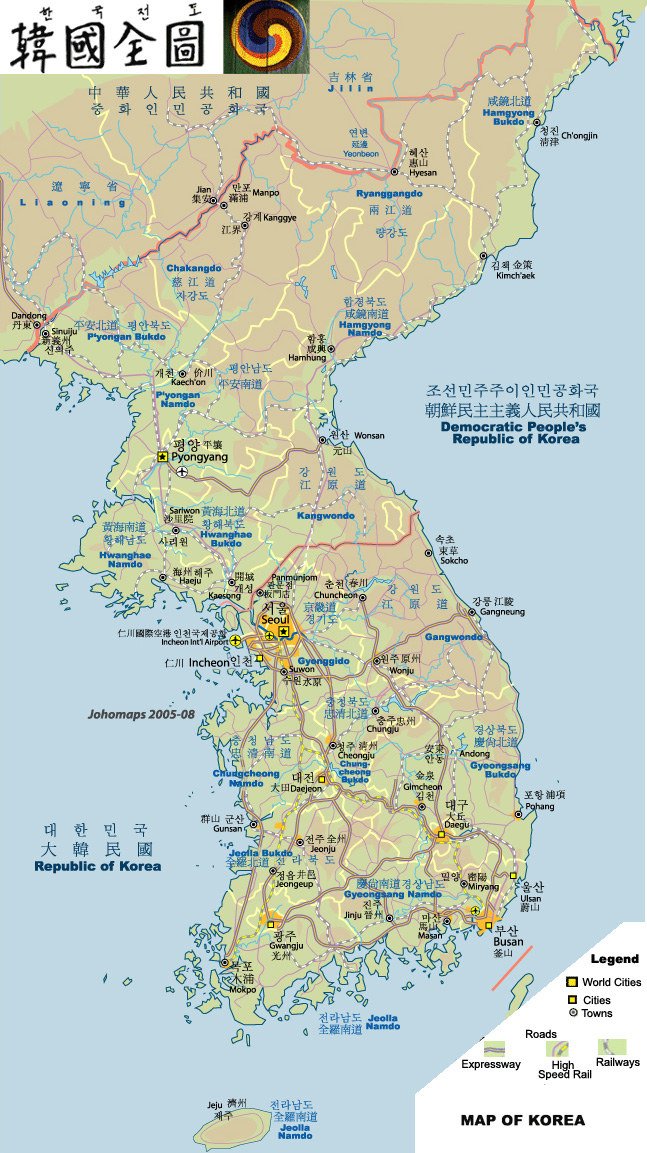 you can see the comparable size of Koreas major cities bordered in orange color,
as well as the distance to their serving airports . recognize the two that serve Seoul to the West : Kimpo and InCheon the furthest driven by an hour or two
and then realize how small the whole country is !
now imagine almost 50 Million people living in the South,
with more than a third crammed into Seoul Metropolitan Area (designated above in orange beyond the actual city limits) !!! 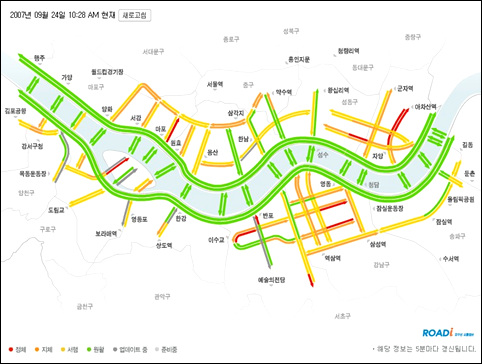 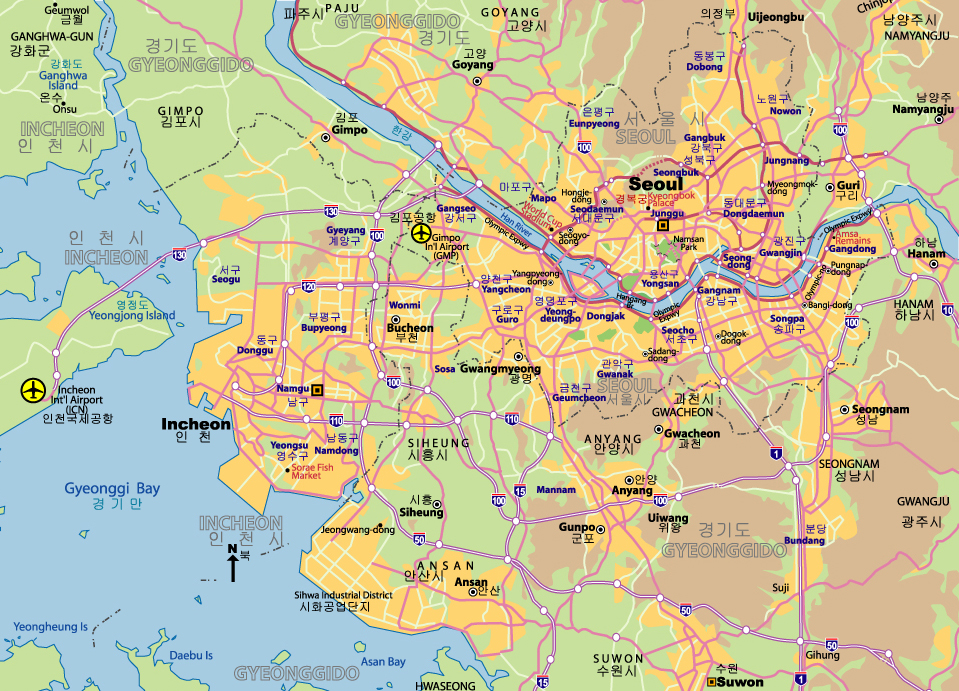 hard to believe in the post-war 1950s Seoul was centered in [Junggu] with the border forming within West Gate [Seodaemun] and East Gate [Dongdaemun].
its serving international airport has been reloated from West-Side [Kimpo] to West-End [Incheon] on March 2001 and is still expanding January 2009 to cover increasing air traffic .
this whole metropolitan area extending far beyond actual Capital boundaries includes several ‘satellite cities’ formed of endless blocks of apartment after apartments – real artificial cities . 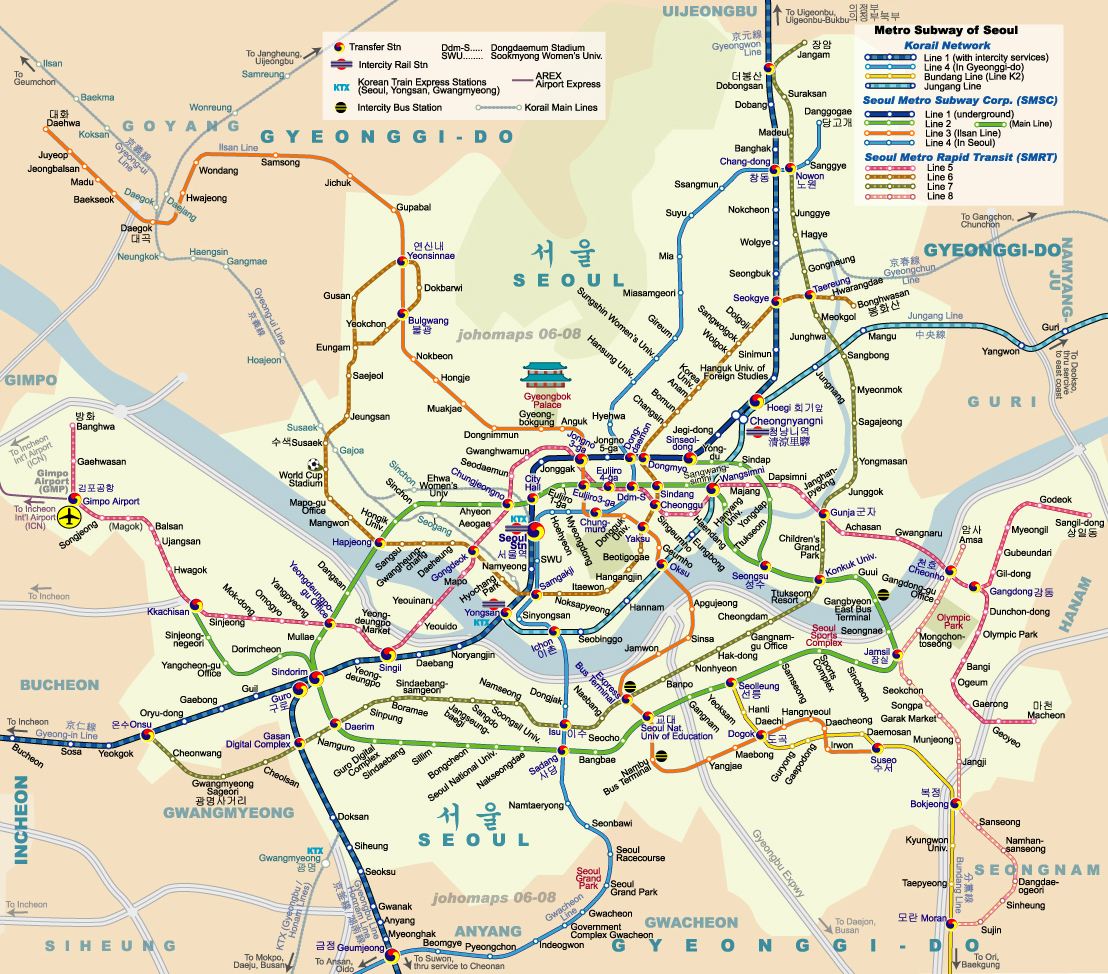 Seoul Subway has been operating since 1971 whose first decade covered the Capital in shambles from construction sites expanding spiderweb lines and is still continuing January 2009 to link airports and satellite cities . with immense scale comparable to neighboring Tokyo, Paris, London and New York .

[ Busan or Pusan ]
South Korea’s 2nd city has been originally called “Pusan” perhaps to facilitate pronounciation by G.I.’s during the war but with the influx of media amounting to the 1988 Seoul Olympics changed the official spelling to “Busan” which is closer in pronounciation but wrecking havoc in a city not yet cosmopolitan to know which to use when nor how it all came to be . 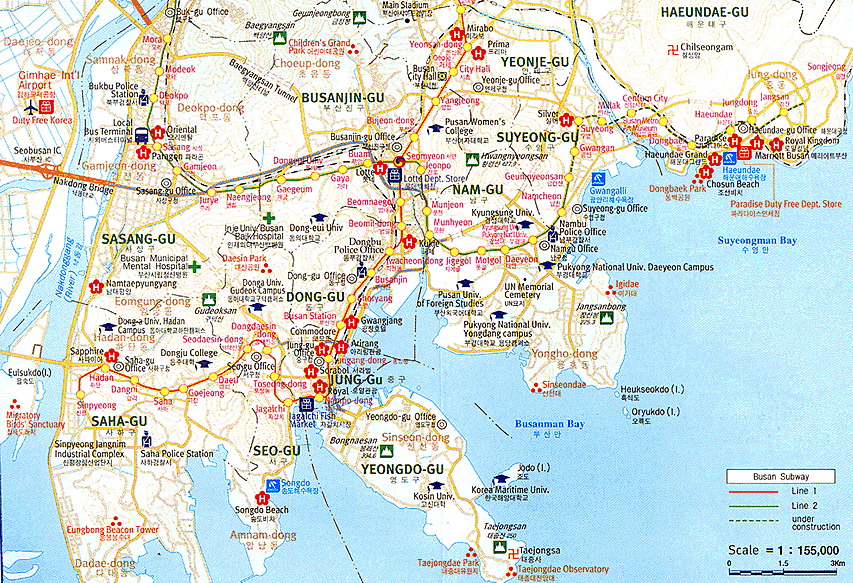 much smaller in scale than the Capital of Seoul it is a delight to ride from [Gimhae Airport] just West of Nakdong River to the East-end tourist beach of [Haeundae] in 30 minutes, when there is no traffic on highways and across the marvellous 2-level KwangAn Bridge (not shown here) out-crossing [Gwangalli] Beach . 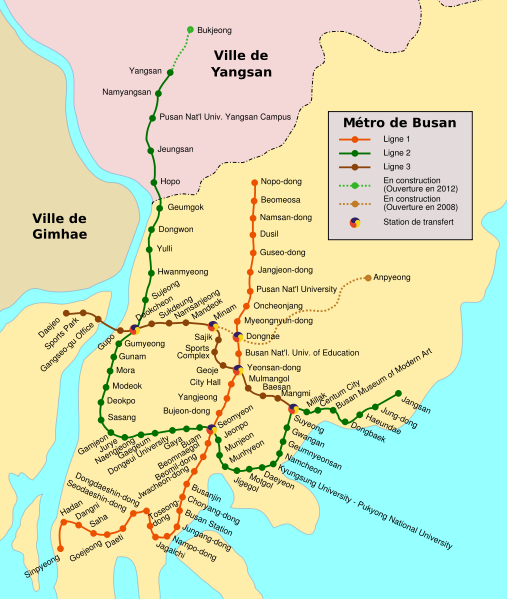 what a simple comparison to Seoul Subway but it works in respect to the many English teachers concentrated here . ‘lo~ mates 😉

ofcourse you understand all this is the old way . learn Korean, which works like a block alphabet (not linear like English) – another early invention – and get a hand-held navigation (more are for cars) WITH traffic monitoring !