all of Korea including North AND South is divided into “Do” blocks .

then where as smaller OR unpopulated (not much in a small Penninsula) or rather unamassed areas are divided into “Eup” then “Ri”,
larger cities begin division into “Gu” or “Ku” blocks . then again into smaller “Dong”.

so here I will introduce you the many “Ku” area districts within Seoul where because it IS the Capital, each has much characteristical flair .
will start from West to East, clock-wise as the Han River as the turning axis .

[ Safety ]
first I should note that like neighboring Japan, South Korea is a much safe place . where even in the remote areas at night rape nor killings are unheard of . in contrast, it is in the rush hours in the middle of a concentrated city your /might/ get snatched . and no, it is not much of a reflection of Koreans as a peace-loving honest people, for in any given land there are good people and bad, then how effective the culture AND/OR legal system keeps its citizens safe . but the fact is that education levels are high here – most graduate high school and even college, and one rather con someone for over an equivalent of USD $10,000.than murder someone for petty change .

thus I have to say if you are flying in for vacation : watch out for black taxis and vans . and if you’re here for work : never trust those that befriends you too soon and mostly the owner of the school you are teaching at .

on the other hand if YOU are the con, usually in the form of drug carrier or trying to teach English with a fake college degree, well the catching tools are improving with much intelligent sniffing dogs AND/OR school administrators who turn a blind eye towards you on-set, only to prey on the right moment to make you flee over-night with your debt unpaid . still the most a foreigner can get away is riding a motorcycle without helmets, but again is the same when a Korean gets caught making the wrong turn in California and shows a Korean driving license .

probably the most sleazy alley you will find in all of Korea will be the once Chinese, now Russian concentrated former “Texas Street” right across KTX Station in the Port City of Busan or formerly Pusan . and yes, Russian gang killings have occured here even in the Millennium .

ofcourse it wasn’t always like this . for the times developing after the Korean War in the sixties and seventies saw a mighty unstable society mostly ruled by regional gangs, of the which the deadliest was the authoritarian dictator and his KCIA Korean Central intelligence Agency -_-

as with any language Korean pronounciation cannot be duplicated in full in the English alphabet . thus some mix up between ‘B’ and ‘P’ then ‘G’ and ‘K’, also ‘u’ with ‘oo’ where I will use my own expression best pronounced for even the government sector in charge of putting up tourist signs have them all ~ mixed up .

[ inCheon international Airport ]
first-off : far left unseen on this map is inCheon, the Western city to the Capital of Seoul and made famous in the modern era for General MacArthur landing to cut of Northern Communist troops invading South in the Korean War . the airport land across the shores of inCheon City were filled from a couple of islands serving Seoulites as a cheap Summer swimming spot . and now inCheon Airport is touted as one of the best by jetset reviews although I take it as half airport and half shopping center . and no-no : Duty Free Shops are NOT cheap, for you can find better deals in one of the many, many on-line stores in Korean CyberSpace //

never take a BLACK taxi or any taxi for that matter for this is unregulated territory (NOT the region but riding taxi this afar) so a KAL Korean Air Line OR independent limousine bus will take you to downtown Seoul in 1~2 hours along the scenery of the Han River . during which you will pass the earlier-built Kimpo Airport which now handles only domestic flights with exception of flights to designated airports in Japan AND China . 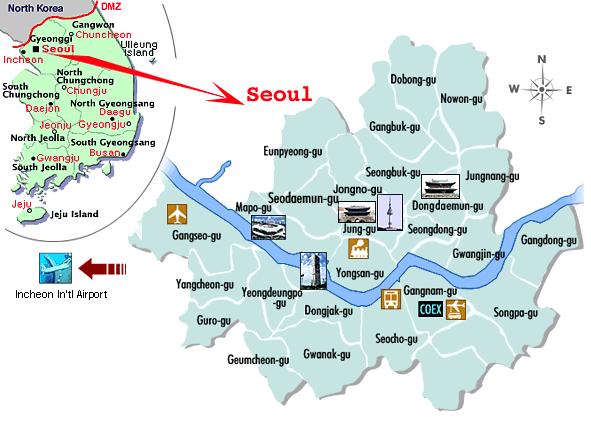 now introducing the ‘Gu’ or ‘Ku’ blocks some clear characteristics arise on how they were developed as the whole of Korea did through the war-rebuilding sixties onto nineties – Millennium is /Technopia/.

[ Gang Seo Gu ] a large field area off Seoul city limits to the West . now habitated by workers serving the two airports of Kimpo and inCheon .

[ Mapo Gu ] a medium-income housing area now filled with bustling cafes and beer halls serving students from a handful of universities that dot this area . noteable is ShinCheon, at the entrance to YeonSei University, a general gathering place, and art school of HongDae (short for Hong ik University) gateway for non-stop clubbing until sunrise .

[ SeoDaeMoon Gu ] not much characteristic due to its midway point between downtown and residential areas to the West .

[ Joong Gu ] and this used to be the administrative CENTER of all things Korean in the middle of the Capital Seoul . starting with the old City Hall Plaza where all major demonstration yearn to be held, a mighty powerful area synonym with remains of ancient palaces, earliest deluxe hotels, conglomerate buildings, best made-to-fit tailors and where modern fashion started : MyungDong .

[ YongSan Gu ] from the time Japanese occupation forces set up camp here, to be replaced by an influencial U.S. Base and the stores, eateries and bars that came for them . with the belated KTX bullet train YongSan railway station has been overhauled into a giant inter-shopping mall in the name of iPark Mall . and ofcourse beyond lies YongSan Electronics Market District that fueled Korea into Technodom .

[ SungBuk Gu ] as the Presidential House is located here from the dictatorial regime, the old rich had residence here . much has since moved South across the river after the KangNam real estate boom .

[ DongDaeMoon Gu ] centered around the last remnent of giant “gates” that surrounded ancient Seoul in the name of “DongDaeMoon” East Gate . city limits has stretched out many times-fold since . and now a renouned wholesale area for interior tiles, old used books, birds and pets stores, textile market and most of all clothes – all wholesale . thus open into the wee hours of the night where boutique owners from around the Penninsula come to store-up and return in the morning to open shop in their hometown . and becoming too known to locals as well as Japanese and Chinese tourists, have opened up several mammoth buildings packed with more store booths . thus wholesale OR retail differ by each building, where the difference is if you buy one each OR several of the same model .

[ SungDong Gu ] again, as their counterpart in the West in SeoDaeMoon Gu : not much characteristic caught in between bustling downtown and residential areas to the East . but in general this IS the sleazier part of the Capital with history of red light districts and now every variety of massage parlours you can name .

[ GwangJin Gu ] a mediocre residential area before crossing the Han River to the East where more barren lands awaited for high-rise apartments to be built, with shopping centers around it .

OK from here South of the Han River, all was much no more than barren fields until the sixties . when land development began in the seventies not many believed another life was possible South across the Han River .. but with the real estate boom in the eighties a new kind of nouveau riche were born, most of whose families spent their money on sending their kids to study abroad .

[ GangDong Gu ] because of relatively cheaper land and enough to build high-rise apartments, this is a sort-of bargain area to live in metropolis-like apartment complexes without having to be filthy rich . further driving East along the Han River are lovers’ lane cafes and motels Seoulites go out in the weekends .

[ SongPa Gu ] as the bulk of stadiums and housing were built here for the 1988 Seoul Olympics, there aren’t much else except wide roads and modern apartments here . noteable is the mammoth shopping complex of JamSil Lotte World which houses a deluxe hotel, department store, shopping mall, indoor amusement park WITH a skating rink linked outside to a disneyland-like palace park !

[ GangNam Gu ] this is where prospectors first started seeking land amounting to the real estate boom in the eighties : areas around KangNam subway station to be exact and is synonymous for the new style of young trends . here New York bakery is de facto place to meet friends and lovers alike . an area to the East in ChungDam Dong developed into exquisite taste and now all the new and modern things in rich, rich and rich are here from Rolls Royce dealers to Prada stores .

[ SeoCho Gu ] during the KangNam real estate boom : where neighboring KangNam was more for stores and business, old rich moving South from Northern SungBuk-Gu lived here in the earliest modern apartment complexes in Seoul, thus Korea . many of them has now come of age in over 20 years and is revamped (torn down and rebuilt) into deluxe high-rise apartment complexes with price to match . this is also the home of all legal matters in Seoul .

[ YeongDeungPo Gu ] this is the only area South of the Han River already populated /before/ the 80’s real estate boom . for this was a relatively a poor residence area for those who couldn’t afford to live downtown, and still is . a close access hopping over YoiDo island was the early bustling area of Mapo, West of Seoul . ( YoiDo island was a business district with some earlier apartment projects, and again still is )is stuck with smaller houses and buildings because such large effort is needed to redevelop all in conjunction .

[ Guro Gu ] while development into a modern country from the ashes of the Korean War, this area was factory with all machinery manufactured and marketed . but as the nation sweaveled into electronics into the IT information technology zone, a bulk of venture companies set up office here thus now a business and management counterpart of YongSan Electronics Market District .

[ Education and Apartment Rent ]
if you are pondering /where/ to teach in Seoul (nation-wide guide on my other pages) because Koreans follow such common work and living habits (dull or reserved however you may want to call it) turn in cycle trends, thus there is such an area as “higher educational district” where the best teachers gather for expensive extra-studies (mostly intended for Junior-High and High Schools) thus giving better chance of entering prestigious Universities which is considered a parents’ ultimate duty in this land .

as far as rent goes : price of sale as well as rent differ aproximately three-timesfold between rural areas and latest high-rise but this is in the case for family dwellings of more than three bedrooms . interestingly, single studio or two-room apartment rent do NOT differ much where you lay eyes on throughout the country .