when one is in a hurry simply do NOT have time to make early reservations, which is just what you need when trying to take the /easy/ flight from Seoul to Tokyo via Kimpo or Gimpo Airport to Haneda Airport – both although originally built before as an international hub, now outdated and taking domestic flights only BUT with a few exceptions to a few nearby overseas cities .

also both are within an hour or even 30 minutes from their serving Capital which makes it a prime attraction compared to their Millennium counterparts which, although mammoth to be heralded by Global jetsets as THE most advanced airport in the World .. TWO hours drive into town is simple a waste even in hard times of IMF .

and as Japan going through hard times as much as South Korea to lure more visitors OR to make-believe of further development have opened up several more airports in mid-nation around the vicinity of Tokyo, although NOT close by any standards . still, unless from Nagoya down South OR up North Sendai which is both an hour away by Japan’s early bullet train Shinkansen, you have to opt from any of these few stray airports to get into Tokyo for business or even pleasure .

yes I have lived in Japan and return regularly and have tried a few of these, namely Mt. Fuji Shizuoka Airport AND ibaraki Airport and will share my experience with you in turn, for not much information is available /anywhere/ especially in languages other than Japanese – and short even at that, perhaps it was meant as a means for the locals to get away ~

both Shizuoka AND ibaraki Airports have two things in common :

then IF you are NOT destined for Tokyo and interested in the surounding itself again, Shizuoka Airport takes the hand because of natural hot spring resorts in the immediate area – and the Godly Mount Fuji is near by !

everything ! you wanted to know about
– MT. FUJI SHIZUOKA AIRPORT –
but didn’t know WHERE to ask :

no, there simple ain’t enough information out there for an outsider to find their way into Shizuoka Airport and ibaraki Airport alike . so I’ll let you in a secret : I read Japanese, yawn ..

it is interesting how both destinating cities announce how grand the opening is going to be, only to see one square building upon arrival . and expect no more, perhaps with ONE convenience store inside . after you land, as you taxi into the main and only terminal you realize this ain’t JFK international . not even on-lookers atop on railing atop buildings as in ibaraki, for this is quite out-of town area relatives don’t have NOT come this far . at Passport Check you will be ushered in a separate row for strangers for the rest are Japanese . but once at Customs they will inquire curiously WHY you have come here OR taken this route into Tokyo AND suspiciously try to check your luggage .

once you are out of Customs you have to decide to stroll OR run ! depending upon the bus schedule you checked before on their Official Mt. Fuji Shizuoka Airport Website because bus departs in 30 minutes to ONE hour intervals . and if you miss one, you have NOTHING to do here -_-

( OK I tried to link English pages for your convenience but it would /really/ pay to LEARN Japanese and study their own website to really make this adventurous but lonesome journey work for you )
thus /really/ : if you study the bus AND Shinkansen bullet train schedule well and plan ahead, it will NOT be as frustrating as most foreigner would initially !

if you know you don’t have much time to catch the bus at the airport : don’t waste time looking for the bus stop . just ask at the information counter directly in front of the gate you exit Customs and they, knowing rather long time intervals between buses, will even run out to herald the bus driver for you !
and oh the shuttle bus is NOT free, so pay Y1000 at the counter .

once at Shizuoka Station there are much more you can do if you have time before the next express to Tokyo (choose station layout)
http://english.jr-central.co.jp/info/station/index.html
(page takes a while to load so be patient)

go to the ticket counter on the first floor and ask for the type of ticket AND seat location you prefer .

in the same Tokaido Line stretching from Shin-Osaka to Tokyo there are three types of trains Nozomi / Hikari / Kodama, out of which ‘Nozomi’ is the fastest Express but does NOT stop at Shizuoka but Hikari does – so you would want to take this one .

here is the schedule link for Shizuoka Station to Tokyo Station in October 2010 :
http://www.shinkansen.co.jp/jikoku_hyo/en/sanyou/suh_shizuoka.html
and colored in BLUE is the faster ‘Hikari’ train type passing every hour .

all the help you will need in using Shinkansen bullet train in their information site :
http://english.jr-central.co.jp/index.html

and remember, if you had to rush in that you didn’t have the time to eat at the station : some of the tastiest dishes can be had in the form of take-out ‘bento’ which you can buy from the passing vendor in cart wheels 😉

( continued ) I will introduce ibaraki Airport in a separate dedicated Page linked on top of my blog, and have a nice trip ~ 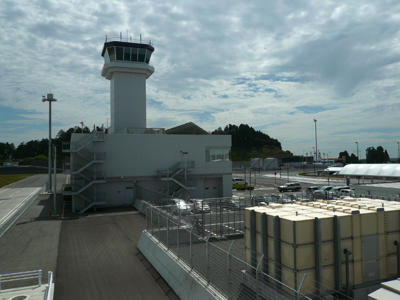 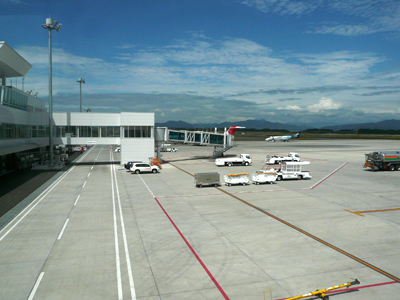 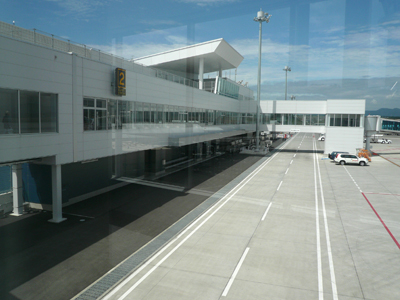 first thing you realize upon landing : is that this is a very new airport, you are in middle the middle of nowhere AND it is gonna take a while to reach civilization, that is Tokyo -_- 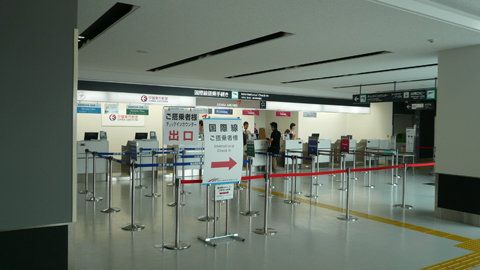 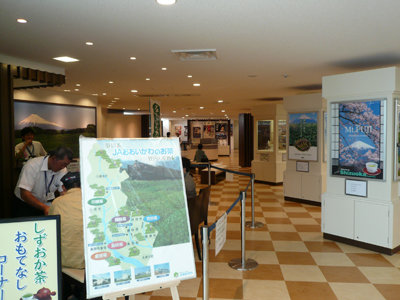 ofcourse a full corner to promote the regional Shizuoka-Ken . 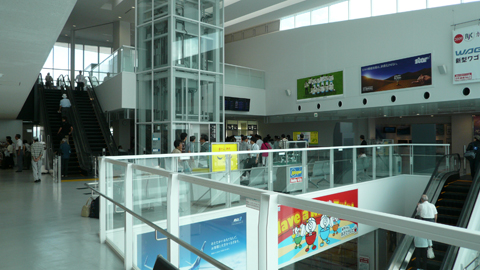 this is about the whole layout of the place and you won’t have to spend more than twenty minutes here . 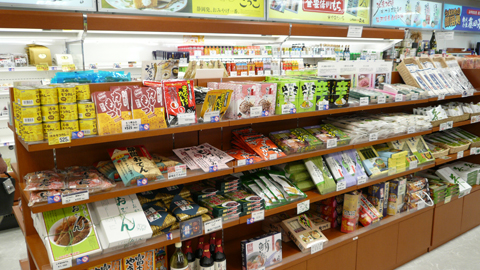 and it would be wise to purchase regional munchies instead of the nowhere-to-be-found latest Sony NoteBook . 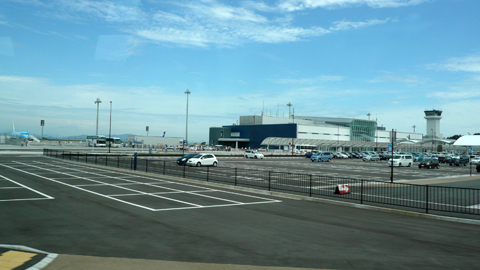 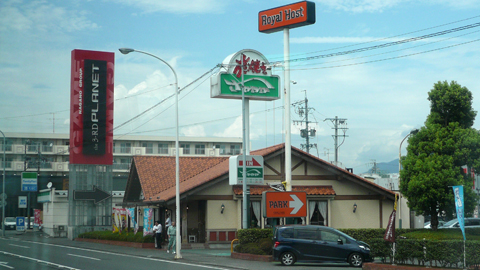 view out from the bus is a rural area almost like the outskirts of California, complete with random diners um, Japanese-style in their local Western eatery chain of Royal Host . 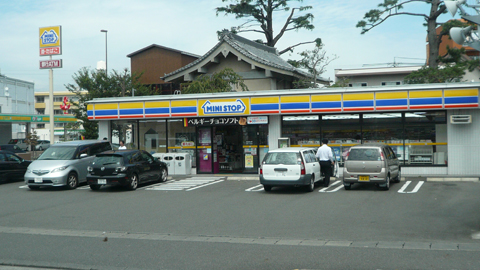 and the Japanese and even Korean counterpart of 7-11 Seven Eleven . 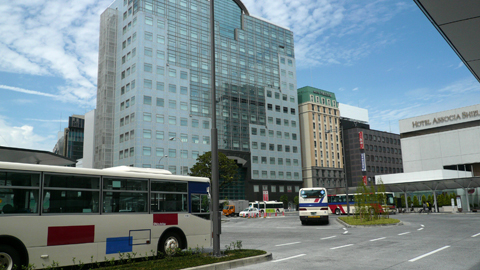 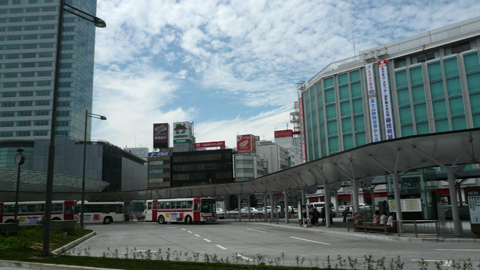 after a full-hour’s drive, arrived and looking out from Shizuoka Station WOW : buildings ! 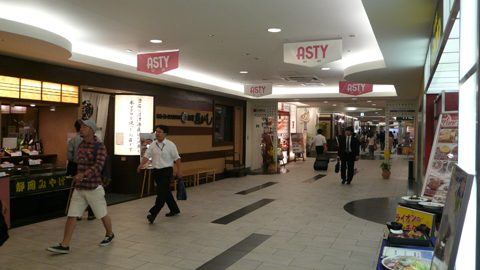 and like any other main subway station in Tokyo and Osaka, filled with shops and restaurants – pretty good too,
ready to take the early Japanese Wonder of a bullet train in Shinkansen up to the Capital of Tokyo, in almost an hour : 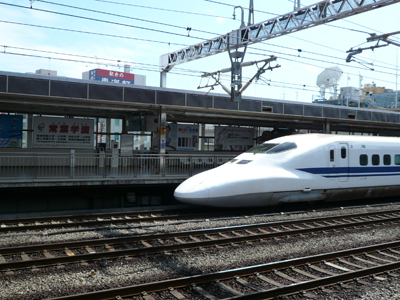 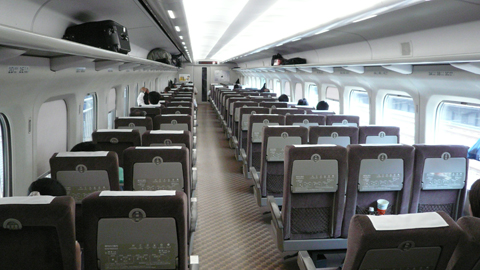