South Korea’s package delivery system made a quick progression counting up to the Millennium as Cable TV as almost 50 channels finally added on the mininscule FOUR existing national TV channels . their shopping channels needed next-day delivery as well as quick return and exchange system, when an all-out war was on between the conglomerates who ran them . as if this wasn’t enough, quick-service ensued, delivering within an hour in-town via motor-cycle . and this evolved more as cable turned to the age of internet shopping malls On-Line, over the Millennium, with more affordable same-day express around satellite cities, of which a couple have now formed around the Capital of SEOUL .

and as belated South Korea is in instigating its own bullet train, some time there-after began their same-day express delivery . in its purest form it is a drop-off and pick-up service between KTX stations throughout the Peninsula – and quite cheap almost the price of next-day registered postage with insurance . this gets better if you add their option of quick-service linking KTX station with point of departure or delivery via motor-cycle and van for larger boxes, by when this gets quite expensive . so consider end-to-end between furthest KTX station takes less than 3 hours, then less than an hour by motor-bike around town so most package can be delivered to key areas in less than four hours .. and it did for me from SEOUL to Busan or Pusan . 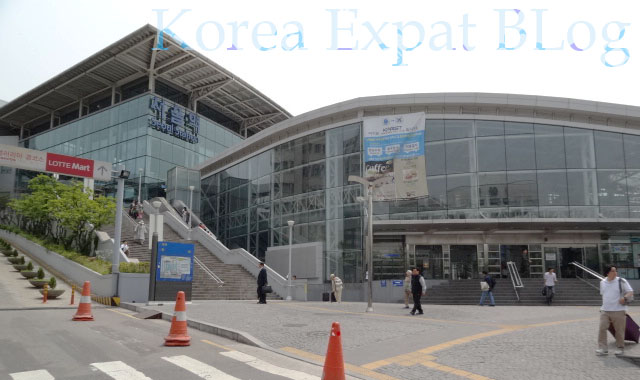 KTX drop-off or pick-up point in SEOUL Train Station in accessible toward its rear entrance on its West Side, thus known since its humble days as SeoBuYeok (meaning West-side station). and upon entering : a floor-ip takes you to KTX bullet train ticketing, and far-below is Airport Express Train to inCheon Airport . but for the Special Deliver you stay on the ground floor and straight-ahead : go-out the door to outside leading to no-where except actual railways – though you cannot ride through here (but THEY can simply toss your package over the fence onto the waiting trains). this is a small operation not even many locals know about so expect a single clerk or two to accept our hand-over your package .

[ HOURS ] below are WeekDay time schedules, while selective trains operate carry this service during WeekEnds and Holidays (Kyung-Bu Line : from around 10am until 7pm, and Ho-Nam : 8am~9pm)

as explained on my KTX Page on top menu : express bullet trains serving South-East to Busan or Pusan departed from and arrived at SEOUL Station, while those heading and coming from South-Western cities like GwangJu or MokPo departed and arrived in YongSan Station, but now it is a queer mixture so check their time-table and below is their office in YongSan KTX Train Station, one level-up from the ticketing area which is already up on the thrid floor of this massive multi-complex .

basic fare end-to-end on both lines from SEOUL and either Busan or MokPo is W7000
for packages measuring less than 100cm adding three sides, with the longest side less than 40cm
and weighing less than 10kg.

they have two Official websites for calculation and reservation, one with English URL and a Korean URL .