in the digital age and especially in over-crowded Korea, paper books is a waste of space . but there still are times you need them and when you yearn for them . I also find for those new to computers both software and hardware : finding a good book that starts from the beginning and leads you through without confusion is a ton better than trying to figure things out from a myriad of free on-line sites . and for those in a strange land far from home : the English, Japanese and Chinese section of a large bookstore in Korea is a mighty nice place to meet new people .

although I list here almost all major bookstores both on-line and off in the Korean Penninsula, I will let you know straight off the top the 3 largest bookstores you should go depending on where you are, because Seoul is one big conjested city halt by traffic 8 a.m. ~ 9 p.m.

the largest bookstore chain in Korea with 6 branches in the Capital of Seoul and the rest in major cities . has long been the favourite of expatriates with extensive English and Japanese sections in major stores (see top of this page)(translates as BookStore).

store locations (in Korean only):
http://www.kyobobook.co.kr/storen/info/StorePosition.jsp

Seoul stores open 9:30 am ~ 10 pm, regional stores open at 10 am.
open all year except ThanksGiving and New Years Day
except smaller ones within Universities close Sundays too .

on-line store offers roughly 80% of titles available at Amazon . their book search on English and Japanese titles results in 3 categories :

and they come well packaged, almost as good as Amazon .

[ Bandi & Luni’s ]
a relative newcomer operating 8 branches within Seoul after formation of modern shopping complexes in mid 1990s . main COEX branch on top of this page is the largest and recommended for English and Japanese titles .
COEX Branch open 9:30 am ~ 10:30 pm daily . but others differ mostly 10 am ~ 8 pm or 10 pm.

they have an on-line store although NOT as effective as Kyobo above .
http://www.bandinlunis.com

[ YeongPoong MunGo ]
a well-known bookstore in Korea but mostly for convenience located within supermarts with their largest main store smack in the middle of downtown Seoul in JongRo .
their branch in BanPo Central City Shopping Complex mentioned in my Seoul Shopping Complexes page has some English and Japanese titles more on travel . open all year 9:30 am ~ 10:30 pm.
one of their 2 Busan branches – with minor foreign section – is located underground Sfunz Shopping Mall in Haeundae right out of the Subway leading to the infamous HaeunDae Beach .

[ Japanese Books and Magazines ]
the main area for new and used Japanese books and magazines is the alley on the North side of Seoul Central Post Office, leading to the Chinese Embassy . this is located between the East and South-East entrance to the fashionable MyungDong . this was the place where teens used to get the latest trend from streets in Tokyo and Osaka but only a handful of stores remain after the surplus of Internet and on-line shopping malls .

http://www.yes24.com
the only trustworthy general on-line bookstore with English and Japanese titles but price a tad higher than the stores mentioned above . still a good place to check out if they have your foreign books in-store .

http://www.bookpark.net
an on-line bookstore specializing in periodicals i.e., magazines with a large concentration in design . mostly from U.S., Japan, Britain, France and Italy . but do check first the major bookstores I mention above because the price is a bit high here .

http://www.yesbook24.com
almost the same on-line counterpart as BookPark above but price quite higher . only for specialty magazine which the above do NOT have .

http://www.dnbooks.com
the most specialized on-line bookstore of all with more concentration on annual subscription of foreign periodicals of all sorts . price quite high . they supply to some of the larger bookstores above . showroom is midway in the alley across from Hyatt Hotel on HanNam side of NamSan (South Mountain).

[ Used Books ]
the main concentration of used bookstores in Seoul is along CheonGaeCheon (Road) just before the wholesale apparel district in DongDaeMoon (East Gate). this is for books Korean although some store a wide amount of foreign books also – though more European fashion and design genres, for smaller local companies to copy products . but the favourite among expatriates is in iTaewon . some of the shops where G.I.’s used to buy and sell have come and gone – noteably at SEOUL Subway Lines 4 and 6 Exits 11 and 13 . where only one survived and another new in operation : 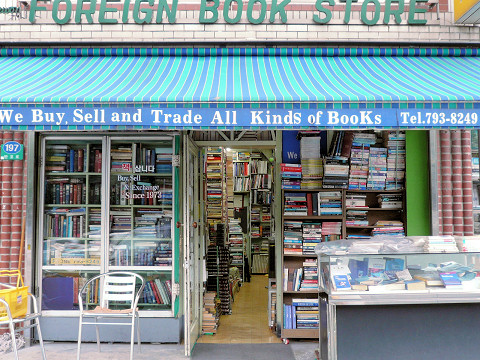 with a front sign that reads Foreign Book Store this old bookstore is probably as old as the U.S. Base across the street . they buy and sell with almost half in magazines . English only and it is such an era that they may not buy your used books – instead pay for freight if you decide to send-in a box-full..

located at the West end of iTaewon shopping street, and just after turning Right towards GyeongRiDan – next to another old-timer : iTaewon Animal Hospital (you know when a business is old-fashioned when it does not come-up on a simple search On-Line).

SEOUL Subway Line 6 NokSaPyong Station Exit 2 and just across the road . or, if you plan to shop at iTaewon first :
iTaewon Station Exit 1 and walk straight West until the end of iTaewon arc sign, then turn right and on the 3rd small block .

http://www.whatthebook.com
a rather new edition of English bookstore open July 2003 in iTaewon . whose on-line store has an English menu ! the only cons are they carry not many titles and the place is hard to find .. so here it goes :

Subway Line 6 iTaewon Station Exit 3 and turn right on the next block (just before the Fire Station), walk uphill and is on the third block to your left – underground by narrow stairs .

and since you are right in the middle of once iTaewon’s Red Light District – the first block you passed on the left was the infamous “Hooker Hill”.
on the same block as the bookstore is a nice supermarket with western and Arab food . and you can take the next turn left uphill towards the Central Mosque on the left corner of the second block . before which you’ll find another couple of Mid-Eastern food stores .

(March 2015 Update) have since moved to a more convenient location on iTaewon main street, but not worth mentioning nor gathering all your books-to-sell and traveling across-town, for they only accept certain books AND will only offer in-store credit so may be better on Amazon or eBay //

but then again .. the best used bookstore  in the whole wide world is none other than Shakespeare & Co. in Paris .. with a tad of nostalgia 😉

[ English BookStores in Busan or Pusan]

in Busan (Pusan) the 2 major bookstores with much, much less English selections than Seoul are located in the same bustling shopping street in SeoMyon .
Busan Subway Line 1 SeoMyon Station Exit 2 walk straight South . on the next block to your left is DongBo BookStore,
keep walking South and on the 4th block on the left is Kyobo Building, whose underground level is Kyobo BookStore . when you’re done you might try the Korean version of TGIF in VIPS Restaurant chain located on the next building – very crowded during mealtime .

[March 2009 update]
Kyobo has opened another branch in the futuristic Centum City shopping complex at the entrance to HaeUnDae Beach, East of downtown Busan : Shinsegae Department Store Centum City Branch 5th floor,
open 10:30am ~ 10pm daily except New Years and ThanksGiving Day .
– Busan Subway Line 2 Centum City Station Exit 12 look right and you are there and welcome to the latest and the largest shopping complex in all of Korea, open March 3rd –

I will travel in Seoul for buy some books . It will from 8th October.Teach me the ways to go to used and old books in english.
I am interseting the Japanese literature books in english but not in Korean and either in Japanese.
Thank you.
Tumen