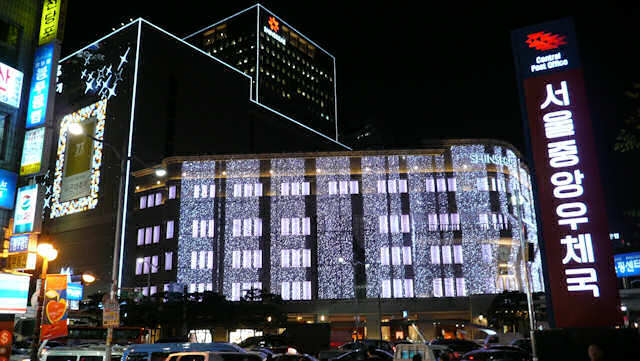 the oldest department store in Korean history ShinSeGae (meaning New World)
now monolithically-added the New Wing on the background
across from the Main Post Office at the South-West entrance to MyeongDong shopping district in the Capital of Seoul, which is even open Saturdays 9am ~ 1pm
along with the 4 major cities’ GwangJu (South-West), DaeGu (South-East) and Busan (South-Eastern port) Post Offices .

harsh surviving following the post-Korean War period and strick military dictatorship hardened Koreans to work, work and work . thus keeping the Japanese notion of half-work on Saturdays and barely getting off Sundays . until the middle class formed mounting to the Seoul Olympics and soon after awakening to the Western aura of leisure and prosperity most companies started taking turns Saturdays off over the Millennium .

more than cultural tradition but for the characteristic of modern living on the Korean Penninsula, major holidays are grouped into at least 3 days for its citizens to return to their home town to pay respects to elder families but more now to show off what automobile they had purchased . or, do all that the week-end before and head out for vacation spots with better deals than the Southern-most Korean island Paradise JeJuDo .

the most change you will notice as holidays near are traffic .yes, always a parking lot day and night in the Capital of Seoul but it really tests the boundaries of civilization as business close before the holidays . then, the long cues on highways ensue . for only the most concentrated areas in the Koreas have developed vastly – making it easier to inter-connect all with zapping-fast internet optic cables – thus all populace gathering around it, only to disperse in vain all together, come holiday weekend .

first to not close-shop but to halt shipping are the many, many on-Line internet shopping malls, for as traffic becomes unbearable everyone uses courrier service to send gifts or actually bribes conjured as .. the impeccably efficient next-day delivery which have become a motto of Korean Millennium shopping lingers on as even the smallest courrier companies are over-ordered .

so although the internet malls never close
all shipping orders stop taking orders mid-week before a major holiday Week-end
only to restart a couple of days after the Golden Weekend .

it is inter-twined with courrier companies which operate partially Saturdays and close Sundays and national holidays .

the only exception is EMS packages originating from Japan which joyfully deliver even on Sundays .

now in the days of cheaper on-Line shopping mals and international brand-names or conglomerate-run supermarts : who would want to shop at the expensive department store – once the epidome of a nation’s development and in the case of South Korea the 70’s and 80’s – a good two decades later than neighboring Japan .

but there lies the prestige and the more expensive they get the more following they get from its kind of suave customers .

most branches in central areas open 24 hours throughout the year – but the experience can be gruesome for some dim lights after the wee hours to conserve on electricity bills .

as the older gather for family re-union and traditionary customs,
the young escape to gather themselves at major shopping malls which are mammoth complexes now – not many but very, very large .

so they have to open all days of the year too and as most contain popular movie theatres : some shops and eateries open well after midnight .

this is one sector ruthlessly strict on keeping national government working hours as all banks and most repair centers close Saturdays, Sundays and national holidays .