aside from ultra-modern shopping complexes and major department stores explained in other pages
the Capital’s shopping area can be categorized into 3 kinds :

we will gather by neighborhoods for some mix the above – heading clock-wise geographically from the West to East
– simply get off at the Subway Station I mention and follow the general crowd . chances are the area would be big enough it won’t matter which Exit you take .

Hong Ik University area better known as HongDae (University)
reflecting the prestigious art school persona, the West block heading up to the University from the subway station is full of late-night jazzy, funky, and whatever clubs, while the vast East block has imaginative cafes along the countless art studios and one-rooms (studio apartments) where art students live and work .
– Subway Line 2 HongDae ibgu Station Exit 5 and turn left on the next Big block then walk up-hill towards the University

ShinCheon
historic playing ground leading from the circular ShinCheon intersection long towards YeonSae University . all sorts of beer halls and cafes where the Western block of the road is a historic open market “ShinCheon ShiJang” . this is an immense watering hole for students living in and communting to the vast Western region of Seoul .
– Subway Line 2 ShinCheon Station Exits 2~3 and walk towards YeonSae University, while Subway Exit 1 opens up towards HyunDai Department Store

NamDaeMun (South Gate)
used to be THE open market central to the Capital of Seoul, thus all of Korea, and over the Korean War one can buy anything smuggled-out from US Military Bases, including pistols . and before the modern shopping towers rose on near-by DongDaeMun (East Gate) : was the apparel wholesale district over the eighties . thought-of as THE shopping mecca for it formed the same then-large block with Korea’s first department store in ShinSeGae (although an old competition still stands in SaeRoNa Department Store – now a fable of almost-had glory past) and now a Decade past the Millennium : still an open market selling a mixed-bag of everything, but noteably as South Korea’s wholesale district for :

MyeongDong
historic fashion block smack at the center of Seoul a block away from City Hall . also MyeongDong formerly MyungDong Cathedral at the East end, has been the staging area for various rallies during the oppressed dictatorship regimes . cornered in the West block are equally historic ShinSaeGae and Lotte Department Stores, with extensive Duty Free Shop levels . as major brand names have moved South of the River to KangNam towards the end of the Century, now Japanese tourists flock to catch the latest “Han-Ryu” (Korean Entertainment Boom) artifacts . so much so, as countless cozy restaurants in the area have adapted to Japanese tastes so less spicy and more Soya 😉

both ShinSaeGae and Lotte Department Stores have  a joyful grocery area underground floors with well defined wine selections . if you like Korean ready-made food such as Kimchi I strongly suggest you buy it here, for they have adapted to Japanese taste palette thus much less hot & spicy pickled variety . and in the middle of two department stores awaits the Seoul Central Post Office, the big glass building at the North-West Entrance to MyungDong .

JongRo
long considered the geographical ‘center’ of Seoul : in a horizontal road of the same name separated into 1Ka, 2Ka .. onto 5Ka, has always been the cheaper cafe and movie theatre area . a block North is another historic ChonGaeCheon road  running parallel to JongRo, where once 2-level highways dumped smog onto the Capital, the current President Lee, while he was mayor : has torn it down to stage an artificial river-park where citizens can enjoy the once-forgotten serenity and light shows at night
– most contentrated between JongGak Station and JongRo 3Ka Station on Subway Line 1,
– while JongGak Station Exit 1 leads to Kyobo Building BookStore & Stationary and American Embassy, Exit 5 opens up towards the River Park

InSaDong
basically one narrow street where traditional brick houses are protected by law – lined with classic souvenir shops such as Korean paper and ink brush . also known for are art galleries (which take 4 areas in Seoul) and the traditional cuisine offered on alleys in-between . many guides on this place in English as well as Japanese so search . can be accessed roughly via 3 Subway Lines, from North to South :
– Subway Line 3 AnGook Station Exit 6
– Subway Line 5 JongRo 3Ga Station Exit 5
– Subway Line 1 JongGak Station Exit 3

DaeHakRo (University Road)
noisy gathering place for students in the whole East side of Seoul, cafes and beer halls  extend North-South vertical road of the same name . the scene turns dark and dangerous after midnight when bike gangs gather from all parts of the country humilate pedestrians as well as passing automobiles so stay clear of bikers with enough lights to lit a Christmas tree – Subway Line 4 HwaeHwa Station

DongDaeMoon (East Gate)
historic wholesale area for textiles, apparel, used books and many else . now several high-rise buildings have popped up full of discount clothes and accessories in tiny-booths serving consumers as well . as a good half of the stores still sell wholesale, store owners all around Korea take the night train or bus to gather all they can in the wee hours of the night and depart in the morning . yes, it is a place where you can go shopping after midnight, but do NOT take a car or taxi in the evening for it is halted traffic in panic . several subway lines meet here :
– take your choice of Subway Line 1 or 4 intersecting at DongDaeMoon Station (at East Gate)
or Subway Line 2, 4 or 5 intersecting at DongDaeMoon WoonDongJang Station (at the East Gate Stadium)

iTaewon
a discount haven once for G.I’s to come out of the near U.S.Base and buy cheap clothes, luggage, custom-made shirts and suits . with the gradual news of the Base relocating, Japanese ladies have come to have custom-made leather, and Chinese tourist abound . as the center-stage of international entertainment, iTaewon is synonym for all things gay and transvestite, thus all hair salons specialize in hair-extension . it is common you stand next to an attractive female at the crossing, and then you hear her speak to her friend in a husky man’s voice ..

ShinCheun (not to be confused with similar-sounding ShinCheon above)
one subway stop before JamSil Lotte World, the playground the young romantics, you find the poor-youngsters playground which gradually grew from a few alleys of nothing to bargain cafes, restaurants and clothing stores .
– Subway Line 2 ShinCheun Station Exit 4

ApGuJong Rodeo GeoRi
yes if you are from L.A., here’s another Rodeo Drive spawning South from West & East Wings of the affluent Galleria Department Store full of European Designer Branches . across from the main intersection : South-West lays the smaller boutiques, trendy cafes and fusion restaurants, while South-East awaits Korean Designer HeadQuarters as well as renowned Art Galleries .
– not immediately accessible by Subway because you are supposed to drive here on an import . oh if you don’t have one yet drop by the Rolls-Royce Dealer here 😉 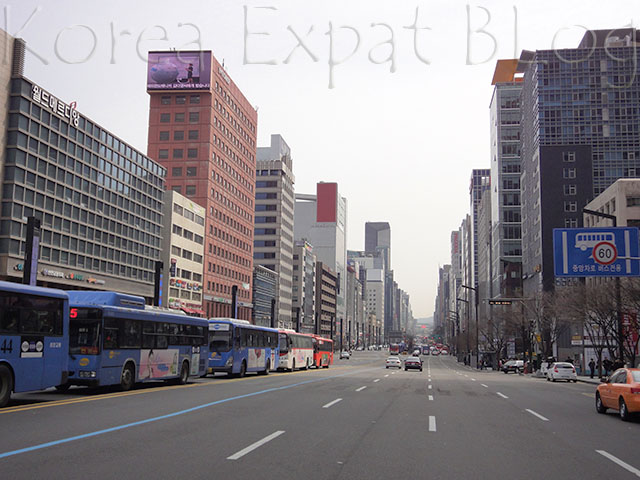 KangNam Subway Station
this is where the second life of Seoul spawned in the real-estate Boom South of the Han River . on the North West & North East block of the subway station : endless cafes and fusion restaurants for the young & hip . South-East is more of a start-up business district and South-West leads to residential apartments .
– Subway Line 2 KangNam Station Exit 5 leads to TGIF Restaurant,
while Exit 6 leads to cafes & restos, after which a walk North of the whole block will lead you to Kyobo Towers Bookstore & Stationary
and Exit 7 to City and CGV Movie Theatres (CitiBank on the next small block from Exit 1),
out-of city Buses to Satellite city of BunDang at Exit 3

SeoRae Maul (Village)
the old rich neighborhoods started North of downtown Seoul in SamChungDong near the presidential palace and over BukAk Mountain where art galleries have eventually formed . at this time the majority of expatriates were technicians and businessmen adhering to the development of South Korea, living in a large area of HanNamDong . over 1980’s as mass real estate development under way South of the Han River : Seoul saw sudden influx of nouveau riche population forming new neighborhoods . a quiet hill in BanPo area was one such neighborhood . and the French community broke off one-by-one from HanNamDong into this area eventually forming SeoRae Maul (Village). then bakeries and cafes opened up adhering to their tastes and voila ~ Korean fashionistas to follow .

it really is a small area in one stretch of road up-hill, but if you haven’t found your needs of aperitifs & desserts Francaise in iTaewon and HanNamDong then head over for a sip .
this is walking distance West-ward from Central City – one of the major shopping centers mentioned in my Mammoth Shopping Complexes page .
Subway Line 7 GoSokBus (Express Bus) Terminal Station Exit 5 – is the narrow road to your left on the next large block .
this is mid-way into the next locale below, which is down the other side of the hill then across the large road and two blocks behind :

BangBaeDong Cafe-Row “KKapae GolMok”
one single narrow road-full of cafes and (Korean) restaurants serving party-goers who drop for late-night dates after the club scene . hostesses who haven’t found a partner for the night gather here after the wee hours of the night . thus Love Motels here . hosts, limited to Seoul are less common than Japan .
– NOT accessible immediately by subway so I suggest you take a taxi from Central City (mentioned on Shopping Districts Page) and say “SeoChoDong KKaPae GeoRi” (cafe alley) and be there in 5 minutes when no traffic

from a Peninsula self-told by elders as the Land of the Morning Calm,
all-the-while long-taken granted as their right-arm by the Chinese,
to be swept in a super-power hurdle in the Modern Age
then over the Millennium rising among a handful of piercing Global metropolis,
– Korea Expat BLog, March 2009 –