unlike neighboring Japan AND Taiwan where its citizens are so~ civilized to have gained the culture of lining-up in queue embedded in every-day life, but also because words travel FAST that a great portion of a mass populace in a small island flock to the same shops or trains at the same time, then also due to the rush to follow the latest trends among a group of people with similar jobs AND hobbies .. you seldom see people in line in South Korea, for each relatively well-educated citizen think they can out-smart the next guy to cut corners . ditto you won’t see queue around Apple Store blocks on the eve to iPhone OR iPad release day (but also because there is NO Official brick-and-mortar Apple Store on the Korean Peninsula).

Oh one exception : at the out-of-city bus stations in KangNam, waiting for express buses to the Satellite City of BunDang, for most are rich enough to have limousines pick them up and see this as an extension – thus the civilized manner of queue . also I swear ALL of South Korea’s inner-city buses should switch to all-seaters facing front like these, as the current ones with half of its seats facing each other – meant more for people to stand-up, is mighty horendous for drivers who think they are riding a Toyota Prius -_-

but you witness a few in MyeongDong perhaps because local wanna-be’s like the Japanese who have invaded these once-classic shopping meccas – well, actually times have changed as Chinese and South-East Asians are taking their place as the Yen currency fall, but more because this is a take-out place selling fried vegetable cutlets at a relatively cheap price . portions are small apt for desert, so you normally would buy several at a time especially before lunch time when there is NO queue ! and the content is rather hollow than filled, and taste over-rated from eatery magazines who have complemented them ..

they are located towards the East-end of MyeongDong main street, soon after the land-mark Royal Hotel and across from the entrance to again a land-mark Cathedral : 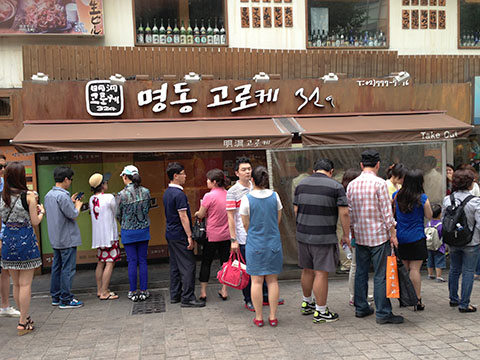 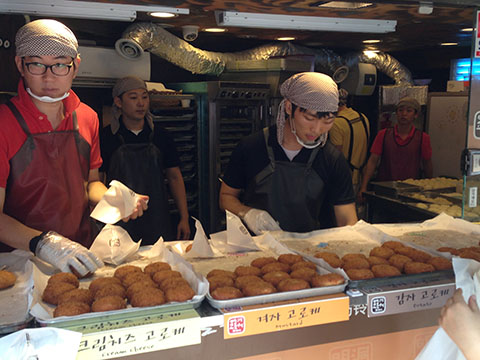 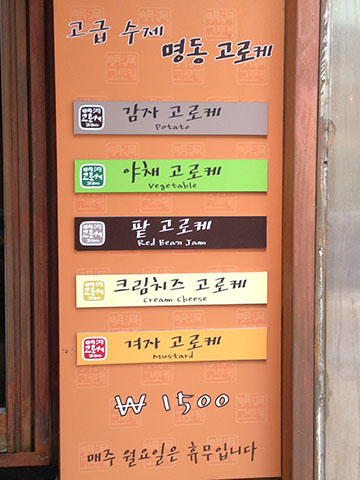 being located in prime property, they are open Week-ends and instead close every Mondays . from my experience they close-shop when they run out of cutlets an hour or two before sun-down, with days of extreme weather such as rain or freezing temperature being your chance to stand less in line ..

of the five types of cutlets on the menu :

while Potato, Cream Cheese and Mustard are a reflection of fusion restaurants – which is a simple term to indicate any mix of things unconvenional – that has become the trend over the Millennium throughout the Korean Peninsula .