THE SHORT VERSION (THE MEDIUM AND LONG VERSION INCLUDES HOW ITS KOREAN-JAPANESE FOUNDER FLAMBOYANTLY BUILT LOTTE GROUP BUT DISGRACED WITH FAMILY SCANDALS TOWARDS THE END): Amidst grudging scandal of its ailing founder’s heir brothers, the latest landmark in the Capital of SEOUL : Lotte World Tower has long been up in front of the now-artificial SeokCheon lake and across from its preceding landmark : Korea’s Disneyland-in-town : Lotte World island . so after neighbors’ protest and legalities, it is finally opening Officially Monday April 3 2017 and on its eve today Sunday Korea’s second conglomerate group is having a short but unprecedented scale of FireWorks .

Lotte Mart and its original Lotte Department Store has been offering various sales mounting up until their historic moment, and finally today evening the whole Jamsil Lotte World complex will be having a short even from 7:30 to 9:30 p.m. climaxed by FireWorks from 9pm to 9:10 for a mere eleven minutes, prepared by French event company GroupeF who has been installing many FireWorks at the Eiffel Tower among major European venues //

to commemorate their proud (among the beginning of solemn era for Korean conglomerates over national scandals) event, Lotte is recommending several sites best suited to view their FireWorks as illustrated below . ofcourse the immediate vicinity around the newest skyscraper will be crowded tonight as their amusement park, but it can be seen virtually all around the Eastern quarter of the Capital as its height is enormous as you would have experiences while driving the Eastern whole of the Han River which dissects SEOUL . 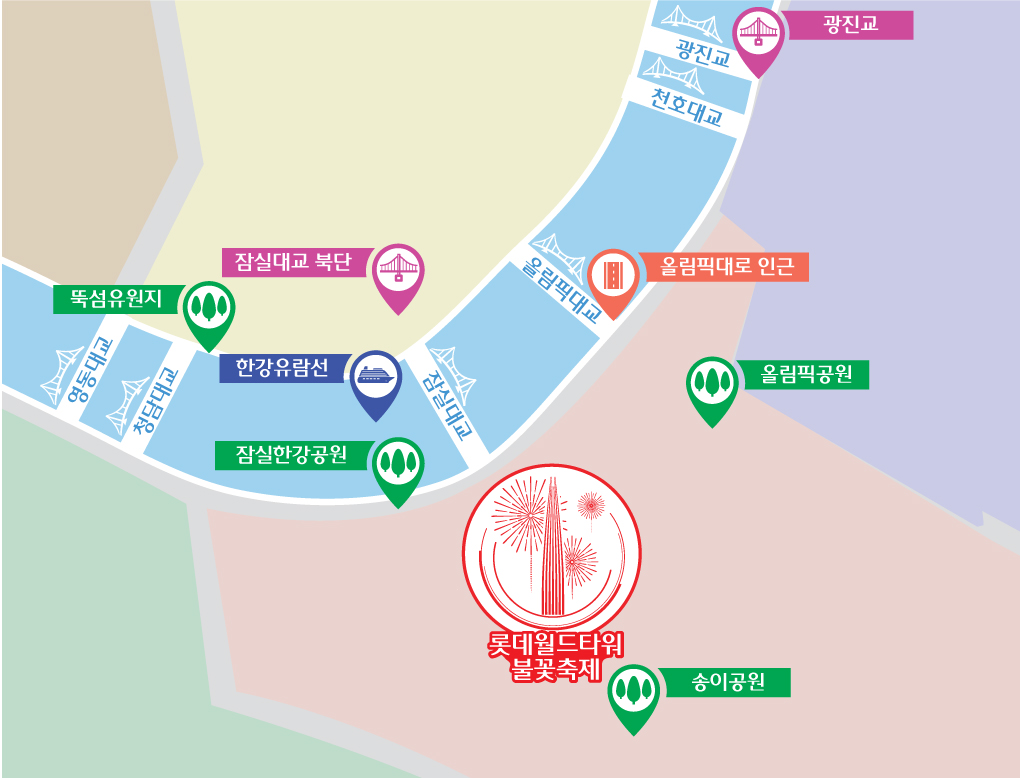 however my own advice from dwelling around the area for years, would be :

OK This might be a once-in-a-lifetime event, so I cruised through above mentioned areas again this afternoon (where the whole Jamsil intersection was filled with traffic, and much traffic-police galore) and would reconfirm the best place after reviewing snapshots and perspective calculation from local maps :

OK I’m off now so Good Luck and hope nothing bad, like terrorist attacks or even mud-hole sinking happens – why I choose NOT to be too close to the actual building or even at JamSil Subway Station //

so the apartments surrounding the area and tall trees may have been the catalyst, but after checking-out on-site : a full large block West of Lotte World Tower may have been best-of-the-best as nothing blocks the view thanks to the wide street in front . then people simply lying just across South of the lake may have had premium view, but the whole point of my advice above, was to keep out of its immediate block for you don’t know what would come from above .

people began gathering an hour early via bus and subway a good hour earlier, and the bulk got off right at JamSil Station whose intersection is where the very building is located . cars were spotted all along main roads, but away from intersections as traffic-police were on the look-out . then more cars started parking about 10 minutes to count-down as if they have done this before . Then Free people of South Korea, especially children noticed the number “6” cannoned around mid-level of the building then counted-down together aloud until “0” when the historic even began . the FireWorks burst only from within the building, as opposed to some news that it would come from around the area also, meaning you only needed narrow view of the whole building, as opposed to panoramic view of the whole area //

it was not a continuous show, but four series of about a minute-and-a-half each with about 30 seconds interventions when only they had inner light shows . and I am glad I went through the trouble of coming near the building even though I had ample view – except of lower floors – from where I and family lived . it was just as the photos released by the media several days before the event – mostly star-bursts coming out horizontally from the building onto all sides . and the series finished exactly at 9:11pm just as announced . then the traffic-block began . cars and bus took almost an hour just to get out of JamSil intersection but I am glad I was alive, in this place and time to experience this – much better than any CGV Theatre 4DX artificial experience !