I vividly remember the I first visited KTX GwangMyeong Station in April 2004 then it first opened . it is not even in the named-City of GwangMyeong, and cannot begin to fathom why they built a humongous train station out in the middle of no-where . it is a huge square-shaped glass palace : virtually empty inside aside from its supporting pillars . taxis were awaiting in a long-line hoping some-one would get them out of their boring misery, every time a train stopped-in – ideally to fetch a foreign passenger to inCheon international Airport ?

ofcourse on-the-map : it is well South below the terminating YongSan or SEOUL Station far up North .. so if you are coming from Southern cities such as GwangJu, DaeGu, Busan or Pusan : you might think it might be better to hop-off here and get a ride if you are headed for the Southern portion of the Capital . but wrong, as a taxi is about the only transportation and cost over W40,000 to KangNam (rightfully translated “South of the River”).

albeit the classic Kevin Costner movie : Field of Dreams 1989 : “build it, and they will come”

now a happy Decade later : GwangMyeong KTX Station has transformed into an unprecedented mammoth shopping complex out-scaling the still-new Centum City Complex, far South-East of the Korean Peninsula : near the beaches of Busan or Pusan . built (giant) wall-to-wall among early established Lotte Premium Outlet and CostCo, there will also be a Westin Hotel opening to house those who opt to shop over-night 😉 and this is the Northern half-block of the station as South consist of start-up companies’ business blocks much like GaSan Digital Complex introduced earlier .

iKEA Korea began operation by opening their brand-new goliath store partially on their “employees’ family and friends Day” December 13 Saturday earlier when the still-large store was conjested that people had to wait a good hour at the counter to check-out . then on their Press Day on December 15 Monday : to let selected media have a peek into their first branch on the Korean Peninsula – sought to be the largest in Asia 0o0 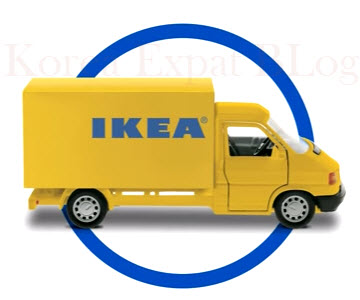 – and like Arctic Scandinavia : they had to open on the coldest frozen day of the year, Korea Expat BLog –

( December 20 Update ) a couple of days after the first iKEA opening : complaints abound of

Ikea is not cheap, and is of poor quality… as foreigners know
Why south Koreans don’t know this…?

1.iKEA is priced better than local brands and imports, which are relatively expensive
– one large reason consumers welcomed its influx, is in the hope it will bring furniture prices down .
2.Koreans know its quality is NOT good, but flocked for its modern European design, which is quite different from brands and models currently on the Korean market .
3.this Post is largely for Expatriates here, who’ve long-inquired when iKEA will land on this Peninsula – than Korean followers .