as iKEA outlets huge taking-up prime real estate property thus expected to be in out-of-hub areas : transportation comes as prime concern . and although the first branch is now located in an express train hub, it still is not a major one – almost a vast empty space prior to the arrival of similar shopping giants like Lotte OutLet and CostCo which took up closer positions to its KTX bullet train stations earlier . and some serious shoppers would consider even stopping over-night at a nearby lodging also if you come from far such as Southern provinces of DaeJeon, DaeGu, Busan or GwangJu .

on-start, the good news is that there is a deluxe hotel in the same large complex West of GwangMyeong KTX Train Station, expect to open in a couple of years . but until then a handful of hotels not quite close may have to suffice . first-off : iKEA is in the large shopping complex West of the again huge train station but is not directly inter-connected to it nor right next doors, so best take a shuttle bus for a few stops or a short walk . then take note that GwangMyeong is only two major stop South of the Capital of SEOUL accessible via KTX bullet train in 15 minutes flat, and about a dozen stops by Metropolitan Subway Line 1 in about 30 minutes . so for people from SEOUL it is best to just hop on KTX which goes South-West – as it is not accessible via the earlier and more common route South to KangNam then onto the vast satellite city of BunDang .

to begin : there are quite a number of the new term in smaller residence-hotels around SEOUL Train Station – mostly just West of it around its rear exit which cost around W40,000 a night . aside from that I recommend three deluxe hotels on its train route to GwangMyeong – all deluxe hotels operated by a Global brand, to rid of any language problems as well as universal comfort . will begin North with the closest to SEOUL station, and counting down South to GwangMyeong (click to enlarge map) 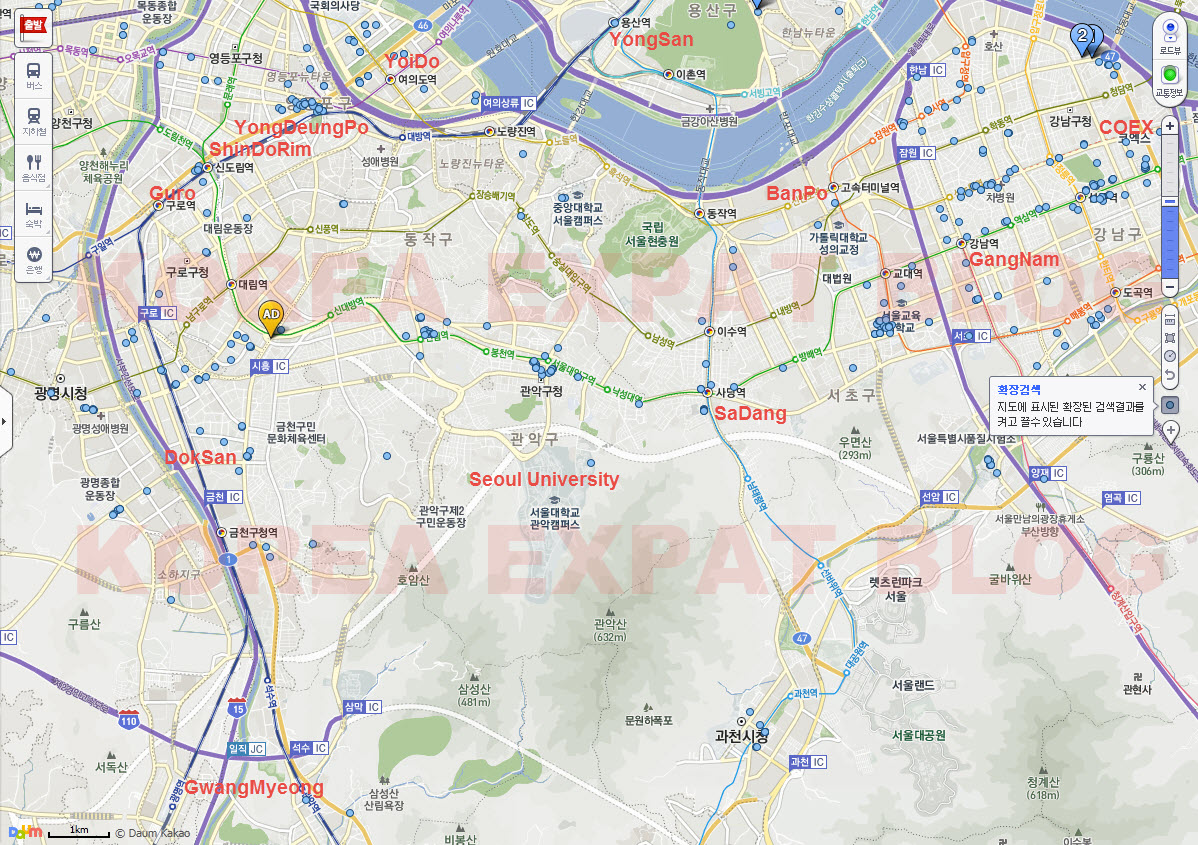 (A) Marriott closest to SEOUL, is with the most high-class shopping right in the new Times Square Mall complex which is right at YongDeungPo Subway Station Exit 4. perhaps only lacking a swimming pool .

(B) Sheration is just one subway station down (although these section out of downtown is all above-ground rest of the way) at ShinDoRim connected to Exit 1, and right above D Cube Mall with another huge electronics-dedicated (but selling others as business is bad) TechnoMart right across from the railroad . also with a classy swimming pool 😉

(C) Novotel is the only one not with immediate subway nor railroad access, and a 10-minute walk East from DokSan Station Exit 1. and could be easily stated : in the middle of no-where, thus would normally stay here only if you have business appointments the the neighborhood . but is the geographically closest of mentioned hotels to iKEA to take a taxi (about W6,000 for roughly 20 minutes) if you plan on buying lots, as iKEA itself too is not directly connected to a train station . also is the only hotel mentioned here NOT in a shopping complex but is in the same block as HomePlus supermart as well as Hi-Mart electronics discount outlet, and also a Post Office . is the most humble and thus cheapest here, but still has a swimming pool although not lavish as Marriott far above //

[ Over-All ]
note some KTX stop at YongDeungPo (Marriott) but only other express or local trains stop at ShinDoRim (Sheraton) and DokSan (Novotel).

to-date March 2015 : above three are the only choice of deluxe international-caliber hotels with easy, simple access to iKEA GwangMyeong . ofcourse you could search for hotels in overtly-business Yoido island or even downtown SEOUL but will have to change subway lines, take a taxi on the way or walk a bit //