South Koreans have had THREE days OFF from work, on the TWO most celebrated national holidays : Lunar NEW Years AND ThanksGiving, where the former is common in the Orient and latter has a slightly different meaning than the States – geared more towards paying respect to the elders . the 3 days are necessary for families to hurdle-back to their home-town, as most are concentrated around metropolitan SEOUL – including its satellite cities like ilSan (North-West), NoWon (North-East) and BunDang (South) surrounding the Capital – where the second is built on top of existing neighborhood and rest two built from scratch upon farm-land .

more-over a NEW official national holiday system has been in effect from 2014 stating :

thus as ThanksGiving falls on a WeekEnd on Saturday, Sunday and Monday : next Tuesday September 29 will be added to its holiday . plus note the following Saturday is another holiday in Foundation Day and Friday after that : Korean Language Day so holidays are plentiful ahead 😉 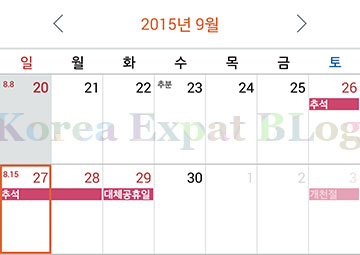 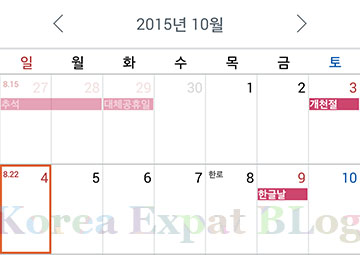 ofcourse these are National holidays effecting mostly Post Office and Banks, so small business may take less off as it is still recession (for-ever after iMF bail-out), but family gatherings may be more important for them than ever ..