favourist hair-stylist of all exaptriates in the Port City of Busan or formerly Pusan, Young-Na (unique name even by Korean standards), graduate of Vidal Sassoon, London had his tiny Apple Store-ish pure glossy white Sabinji Hair Salon deep~ in the alley a block South of Lotte Department Store, DongRae Branch up on the way to Busan University .

and now he moved to take over with his team another Hair Salon I frequented while living on KwangAnRi Beach, again deep~ into NamCheon Market but better traffic for still-tourists like me . 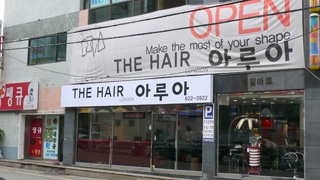 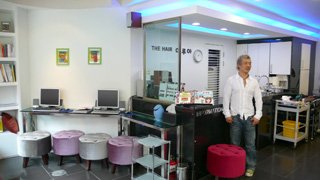 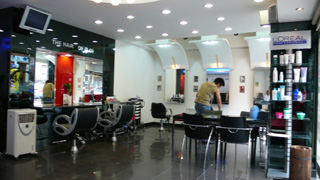 yes a well-built friend and it kind of weird his large fingers doing the coloring . he plays rugby in the WeekEnds with his local team .

in all fairness : cuts and coloring not as refined as Vidal would want to be but about the best hair stylist speaking English, although a few others in this touristy area ..

Busan or Pusan Subway Line 2 NamCheon Station Exit 3 and take the first Left alley down towards the sea, then until the end of the short alley and take a Right, and it is the third building to your Right .

Google Map can show you your way at :
285-2 NamCheonDong, SooYoungKu, Busan

don’t come here for hair alone, for right across is the fish market building all fresh of the day ! they’ll even ice-pack it for you to carry it up to the Capital of Seoul or even send it over-night .

taking either roads on the side across from the hair salon will lead you towards the sea and Western ramp of the mighty KwangAnRi Bridge .
and on the way is the gas company for the whole NamKu area so if you live around and need to pay bills,
further down is a super-large Mega-Mart and next to it on the pier is OutBack SteakHouse and its competing Korean restaurant chain VIPs with great salad buffet 😉