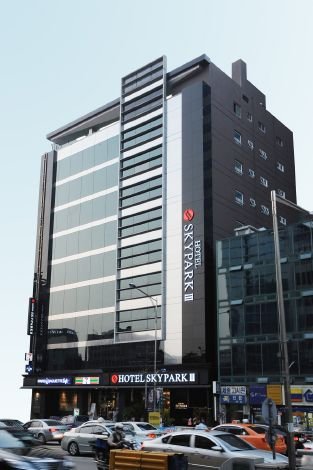 shown a might successful new kind of hotel chain smack in the heart of Seoul : Hotel SkyPark III

in a traffic-conjested metropolis, hotels are lined in my mind according to the proximity of main business or pleasure at the destination . and for in-bound tourists increasing by the day to take a swab of flying Hallyu (Korean Wave mostly from melo-dramas but of K-Pop influence too) phenomenom which is now lingering longer than mere fad :

make-up shopping mecca of MyeongDong, wholesale apparel district of DongDaeMun and the classic NamDaeMoon (South Gate) open market are the ultimate destination . because these old downtown areas can be ventured by foot where as the newer, posh KangNam South of the Han River is the land of European brand names with as-high prices as their own country .

step in here in the WeekEnds and you will think you are in the main pedestrian intersection in front of Hachi Dog Statue in Shibuya, neighboring Japan’s fashion mecca at Tokyo’s West window .

a block away from the center of central Seoul where a pack of deluxe hotels from a block in Plaza, Westin Chosun, President and Lotte Hotels, is the old fashion district of MyeongDong, always has-been since recovering from the Korean War . a handful of older hotels has taken foot-hold in this prime real-estate space as in Savoy, Royal, SeJong, Pacific and the more recent iBis Ambassador . but a new contender is in town, with a Millennium view of service, all with affordable price – because not much space can be alotted for a lavish deluxe hotel in this prime-block .

it is a concept practiced early-on in neighboring Japan where railroad companies link railroads, and built hotels on top of major stations and shopping malls underneath, some in many tiers .

so in an area where so many shops are clutter together than shoppers would not go several stories up each small department store (unless it is large to fit a couple of Duty-Free Shop floors like Lotte and ShinSeGae both across its Western entrance) three originally shopping buildings have converted their upper floors into business hotels .

while deluxe hotels claim discounted prices of roughly USD $250 a night, a business hotel or another popular form of accomodation in residences sport a tad over $100  . the major difference is the missing swimming pool . still the most business of hotels in South Korea would be larger than its Japanese brothren where you will have a hard time opening a set of luggage in a single room .

we’re talking about price and service a bit more than Japanese Toyoko inn, less than French iBis and almost to the tune of American Best Western hotel chains .

the first SkyPark Hotel opened August 2010 and currenlty operating 3 hotels differentiated by i, ii and iii all the same crowded shopping block of MyeongDong
between Seoul Subway Line 2 EulJiRo Station Exit 5 & 6 to the North-West and Line 4 MyeongDong Station Exit 8 & 9 to the South .

visitors are overtly Japanese women, while SouthEast Asian and Chinese would take hold of another cluster of hotels around wholesale apparel district of DongDaeMoon (East Gate) 10 minutes taxi ride to the East .

Oh, if I can list and comment on all~ my favourite hotels, motels and inns
– Korea Expat BLog, beginning of Summer 2012 –