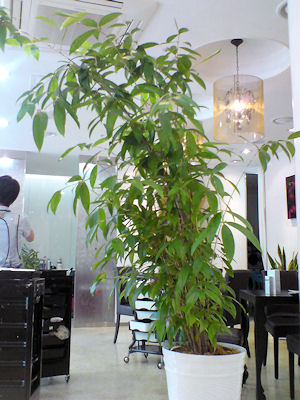 I have a hairdresser in KangNam with a long clientel of the old rich, keeping fit weekends on water-skiing and skating . his other hobby is to look around and pick up plants . and there it was .. an exotic plant for Korea – yes, like all fashion once the fad shades in : all household will have that same plant .

Dracaena Godseffiana or Dracaena Surculosa known in Korea simply as “GoduSepia” (for some species are not imported and the whole name shortened for convenience among growers & suppliers). belonging to the bamboo family don’t require frequent watering . smaller and taller variants where the tall, ceiling-touching ones with medium-dense leaves attracted me most .

brought me immediately images of West Africa where first originated, so headed the next day for BanPo Flower & Plant Market “BanPo KKot-ShiJang” open early for a large portion of wholesale starts here for Seoul . several shops had it with different shapes and price W95,000 ~ W140,000 with delivery . the place where I bought – the owner lady said she prays a short ceremony whenever she gives her child away ?

the whole big block of this neighborhood is BanPo Bus Terminal serving out-of-city Buses, linked to the West to the modern Shopping Complex of “Central City” which includes :