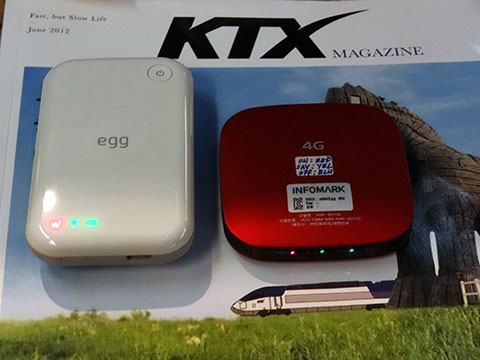 Oh I love riding the Maglev from ShangHai Airport accessing a disney-ride into the most cosmopolitan city in China, more than the Capital of BeiJing,
and was the first to try KTX from the Port City of Busan or Pusan on its maiden voyage .

it surely is the most price as well as time-conscious, for

out of which : the single-row seats on First Class ( correct Korean translation is Special Room) was a bargain
for you can do much business in the way of computing on your laptop or notebook on the way .

with regular rides between Seoul and Busan, my last visit was in April 2012 and now in June I find First Class tickets hiked-up, while airfare has declined 0o0 so now :

but take-into-account airlines offer mileage and KTX has its own membership card :

[ KTX Train Carriages ] are ordered so that carriage #1 in the first carriage pointing North, no-matter which direction the train is heading .
so, on a South-bound train the most rear carrage would be carriage #1

the major disadvantage of regular class is that in each carriage : half of the seats are facing North while the other half South .
in contrast : ALL seats in First Class and movie carriage is turned to face the direction the train is heading .

*all price approximate and relative as they change
and on the Seoul-Busan Route : First Class Carriage 5 Seat 12A on North-bound, and 1A on South-bound seats are my designated seats
while Sue always prefers the movie carriage even to sleep !?