in a small land-mass packed with common population : making your kids study and enter the highest University possible was the only way one could live get out of nation-wide misery from the Korean War, and insure your own prosperous retirement . thus a strict education system lent from neighboring Japan during its occupation system stuck and remains even the era is turning to low population that the government now has to increase  immigration work-force . You as English teacher witness how elementary grade school students are put into extra studies early-on .

among this is hands-on classes where teachers give-out small insects in a cage intact after learning about it in class . so often is such that most parents tell their children to not accept it, as they do not want to care for it afterwards . and in on such instance : it was that I found a small crab hurdled in a transparent plastic cage, with fungus growing on what seem like a mixture of grass and wet soil, as the kid had not cared for it for a couple of Months except spray water onto the whole transparent plastic cage .

I had not planned on taking-on any small pets since my own round of mishaps from ignorance as owner : spraying too much insecticide on birds, water turtle dried-to-die and mini-hamsters who ate themselves 0o0 but thought anything was better than leave it here, to leave it to die among rotting garbage .. the kid was happy to pass it onto me, when I ask one simple question : the name of the exact species of crab that its class teacher was supposed to have told her : “Thief Crab”. I saved it to take it home, to find one resilient creature that thrives throughout this Peninsula ..

[ BEFORE AND AFTER ] on a quick internet search : it was fortunate to find this species dwells on wet-land and eats almost anything . so for the first night : I simply discarded the fungus portion and left the rest, adding a broken coconut soap-dish over-turned to offer some hiding space, a bowl of tap water I had held for days to give to my plant and dried fish common on Korean cuisine . 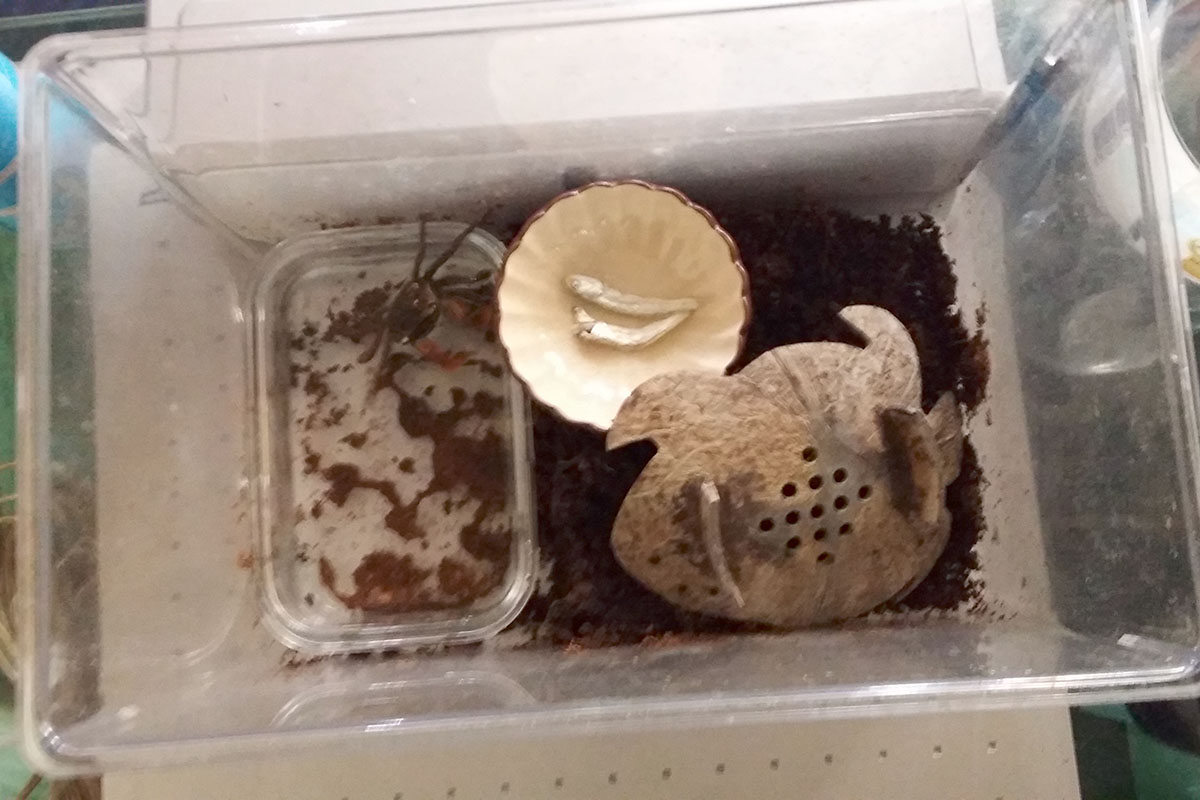 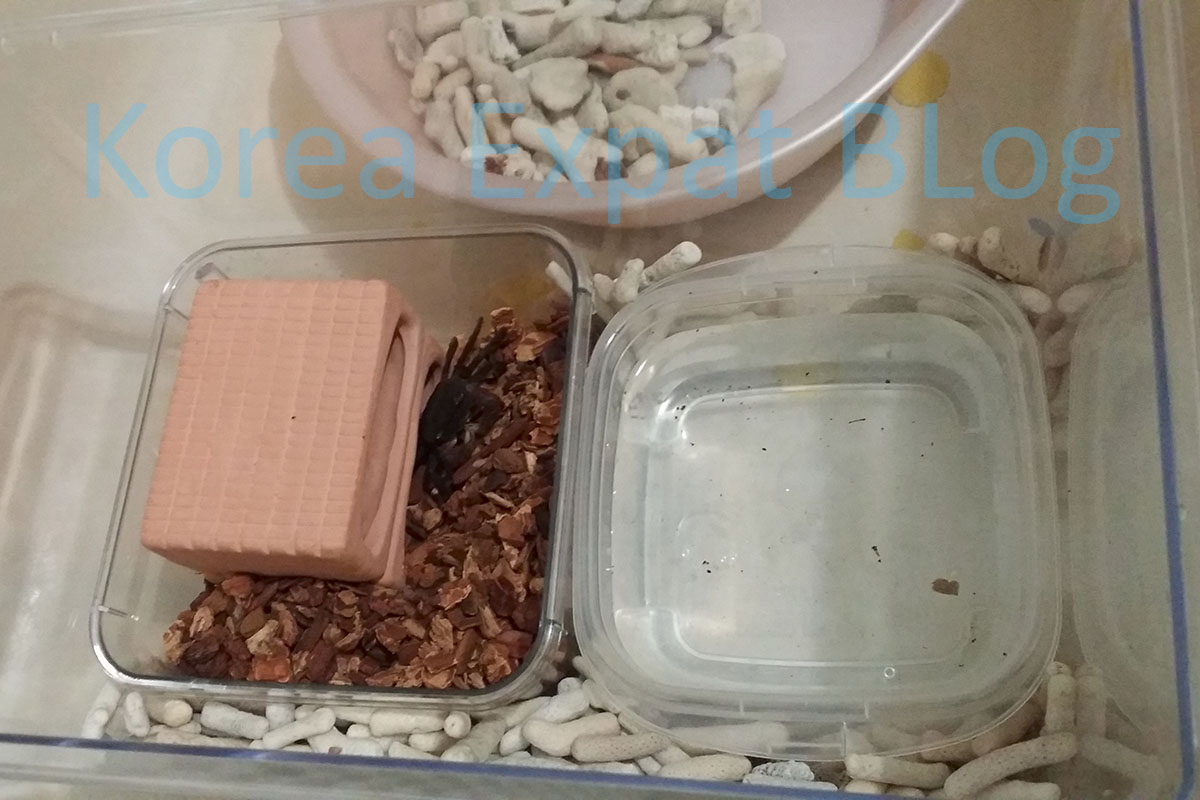 water and food was no problem, so it was the cage and bedding . thanks to a much-developed On-Line shopping system in-place in now-prosperous Korea : I ordered tree bark, shore pebbles and holed-brick from a couple of insect, reptile and tropical fish-specific malls, to have it delivered the day after . so a nice plastic aquarium was in place on the third day .

[ DESIGN ] I put emphasis on light, bright colors as I had been sick of seeing the dark surrounding the crab was in previously, headed for death . I had ample small pebbles from the waned succulent plant hobby, but decided on larger sea shells and beddings to facilitate cleaning, as I would have to regularly .

[ BEDDING ] I found one blog calling itself “The Red Crab Research institute” where he was hatching hundreds of this specific type, and even researching on a soil that cares for crabs’ waste by itself, and would re-open in Spring when the crabs return from Winter hibernation . other-wise, shopping malls selling these and a few other types of small crabs were either insect and reptile specialists (which have grown to a pet industry from late 1990’s) or full-fledged tropical fish and aquarium malls . because they take up only a small portion of sales : information was minimal, and their sole instruction on bedding was wet soil .

but deducting from their specific habitat surroundings around the Korean Peninsula (introduced in a separate Page on Top Menu): I built my own bedding design, but in compartments that I can change regularly by portion, as it would be a mess to clean everything at once, regularly . they dig burrow into ground : so I put tree barks (initially treated for pet reptiles, supposed to retain moisture) about two inches deep, and put a porcelain container with a hole on the bottom to cover its over-head to protect its extruding eyes when dug .

the crab adjusted immediately to its new, bright surrounding : moving from land to water and vice-versa 😉

[ HANDLING AND MOVING ] while some shopping malls showed these crabs hand-tamed, it was well known they pinch you when approached, and they swiftly run away only to hide .. so direct handling was not an option at this initial stage . instead understanding that they head for hiding area : I put down a hole ceramic (about 4 x 3 x 2 inches) near it, for it to go into it by itself . and once in : move it to the new container aquarium – sort of like a crab elevator or space shuttle 😉