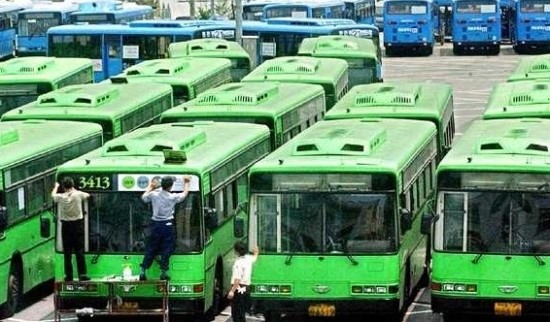 Taxi is a Public Transport ? perhaps if the Bible can be translated every 3 years to adapt to technological advances mankind is achieving . more-so if Korean politics rule over literary sense . actually there are two views to this : whether it is because anyone can take a ride on it, with payment .

the Bill is considered due to taxi industries’ current difficult stance, came up from the Ministry of Land, Transport and Maritime Affairs and without incidents and lawmakers see no reason for it NOT to pass on 23rd Friday . if passed, may eventually bring about increase in bus fares .. and so on .

the strike is proceeded by bus companies than their drivers or mechanics . what is at stake for the bus industry : is whether annual government funds of W100 Billion Won almost 92 Million US Dollars aiding the bus administration – including bus purchase and gas, would have to be divided to adhere to taxi companies as well – thus a large slice of the pie .but the imminent impact on every-day citizens would be the nation-wide bus strike going on effect from twilight tomorrow, protesting even if congress will announce to consider this Bill, which they are .

their rationale : “tax-paying citizens will eventually have to pay for, what the government has failed to impliment to save the taxi industry.”

inner and outer city transit buses will be affected and not chartered or tour buses . several ailments consdiered are :

( November 22nd Thursday twilight update ) regional talks between administrators and bus companies are continuing, and with some fruit as some regional bus will delay its strike for a day or retrack nation-wide strike plans already in effect from 0 hour today :

free bus to ease South Korea’s widest traffic emergency is being contemplated, but may gather altering bus numbers of 20% normal run at best . most effected will be people dwelling in handful of Satellite Cities trying to reach the Capital of Seoul .

in an unprecedented move : KyungGiDo which is the whole outer surrounding region of metropolitan Seoul is implementing FREE taxi from bus stops to near-by subway stations ! private taxis will continue every morning from 6 to 10am until bus strike normalizes, while company taxis will offer this run same hours on today Thursday 22nd November – of which time will be considered work and gas provided by its company .

( morning update ) after a brief-but-confusing sunrise, all bus operation returned to normal schedule as of 7:20am . but the bus industry still firm in further strike, if the Bill including taxi be considered as public transportation, pass tomorrow .

( next day update ) the Bill has been put on hold, until authorities can devise alternate solutions, and will raise the Bill on the next session in case they don’t find a working one . while this time around taxi companies in return threatening to strike if the Bill doesn’t go through .

the core of the problem is that taxi companies are having a hard time, as driving service in case of drunk (they dispatch a one-time driver to your location to drive your car home) increased, taxi business has been going down, but still taxis constantly increasing // plus recent bus and subway apps, in conjuction with traffic-aware maps on smartphones come incredibly precise : telling arrival time AND routes // and thus the bus strikers, swore the government is trying to burden tax payers with what they have failed to solve in declining taxi business, by dispositioning “taxi as public transportation” .

so the probable outcome now, is to reduce the number of taxis while raising its basic meter fee .

just when you were getting used to iPhone bus apps ..
– Korea Expat BLog, mid-November 2012 –